This is the seventh part of an eight-part article about Maintenance Mart distributing jan/san supplies for the Super Bowl.

University of Phoenix Stadium had already been named the host of Super Bowl XLIX by the time Maintenance Mart was hired, so Riley and Kraus were plenty aware of what they were getting into. 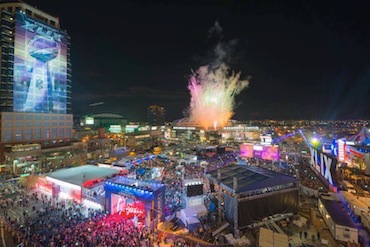 The stadium didn’t place its order for the Super Bowl and the Pro Bowl until about the first week in January, says Callender. But Riley says her company began preparing several months before the Feb. 1 game. Maintenance Mart beefed up its inventory and promoted its involvement on social media, even paying to “boost” a few posts on Facebook, she says. Maintenance Mart also performed a dispenser check for the entire stadium to make sure everything is in working order.

Since so much construction was set to take place around the stadium right before the week’s worth of events, Callender wanted the jan/san supplies completely delivered about two weeks before the Pro Bowl, which took place a week before the Super Bowl. He placed one large order for both games. Riley, however, says it took Global Spectrum some time to finalize the order, because there was confusion as to whether the NFL was supposed to provide supplies for the concerts and other events going on right outside the stadium, or whether Global Spectrum was supposed to provide them.

“Not only did [the stadium] have more capacity on the inside, but they also had a lot more media and they had a whole bunch of events going on outside that they ended up being responsible for,” says Riley.

University of Phoenix Stadium holds 63,400 people for an average Cardinals home game, but the stadium expands to hold 72,200 fans. Riley estimates that the order for the Pro Bowl and the Super Bowl was about 15–20 percent larger than one of the stadium’s average orders. The additional jan/san supplies consisted mostly of paper towel rolls, hand soap, cleaning chemicals and trash bags. The stadium also ordered a number of extra brooms and dustpans for porters to carry around during the games.

Traffic in the Phoenix area and heavy security at the stadium increased the time necessary for a delivery, so as soon as a shipment came in to Maintenance Mart, the company sent it along to the stadium.