This is the first part of an eight-part article about Maintenance Mart distributing jan/san supplies for the Super Bowl. 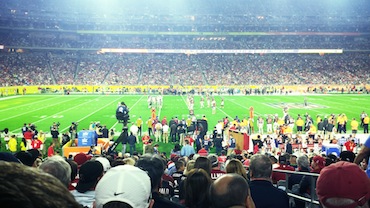 So what is the value of being the official jan/san distributor for Super Bowl XLIX?

Maintenance Mart, based in Phoenix, is the supplier for the University of Phoenix Stadium in Glendale, Arizona, which hosted this year’s Super Bowl. Maintenance Mart owners Shelley Riley, president, and her husband, Al Kraus, CFO, say they’re unsure of the exact dollar value, but they know it’s substantial.

Dan Callender, assistant director of operations for the University of Phoenix Stadium, which is managed by Global Spectrum, put it another way: “I’m sure being the supplier for something as large as janitorial supplies for the most viewed event in the world, I’m sure that has a nice sound to it.”

And while supplying the events was great for business, it also appealed to the fans in Riley and Kraus, who were able to bring their two teenage sons to the Pro Bowl, also held at University of Phoenix Stadium, the home field of the NFL’s Arizona Cardinals.

“It was really neat to see the whole setup they had there,” says Kraus. “It was pretty amazing. We had never been to an all-star game of any kind. It was a lot more exciting atmosphere than a normal Cardinals game, that’s for sure — or even a playoff game for that matter.”

Maintenance Mart has long supplied sports venues in and around Phoenix. But Super Bowl XLIX, between the New England Patriots and the Seattle Seahawks, plus this year’s Pro Bowl, marked the highest profile sporting events with which the company has ever been involved.

“I was excited,” says Riley. “I think we all were. If you go onto our Facebook page, we did a couple really cool announcements that we were the provider of products for the Pro Bowl and the Super Bowl.”

next page of this article:
Serving Arizona Sports Stadiums