This is the second part of an eight-part article about Maintenance Mart distributing jan/san supplies for the Super Bowl.

The Arizona Diamondbacks play their MLB home games at Chase Field in Phoenix. The NHL’s Coyotes play at Gila River Arena in Glendale. The NBA’s Phoenix Suns’ home court is Talking Stick Resort Arena (formerly the U.S. Airways Center).
Maintenance Mart serves as the janitorial supplies distributor for all of them — plus about 80 percent of the Cactus League spring training facilities, says Riley. 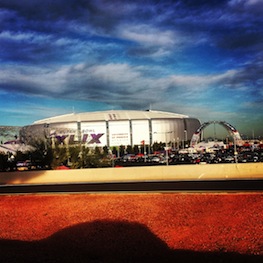 For a local company, Maintenance Mart is pretty large, says Kraus. With 23 full-time employees, the company has distribution branches in Tucson and Tempe in addition to Phoenix. And each branch has its own retail store, where jan/san supplies are available for purchase by the public.

Still, most distribution companies that service the four major sports leagues are larger regional or national chains, according to Kraus. But not in Phoenix.

“We dominate in Phoenix,” he says.

Maintenance Mart serves more than just sports venues, of course, and it would be unfair to attribute all, or even most, of the company’s success to these few big clients. From pushing American-made and green products, to making night deliveries for its customers’ convenience, there are myriad reasons Maintenance Mart has become an industry leader in southern Arizona. But it’s the sports venues that get prospective customers talking.

“It’s a great reference for other customers,” says Kraus.

A résumé that already includes sports venues is a draw, especially when the prospective client is another sports venue.

That’s partly why University of Phoenix stadium hired Maintenance Mart in 2013. By that point the stadium had already secured the Super Bowl for 2015. Bringing in a new distributor that already understood the sports venue market better than any other jan/san distributor in the area had obvious appeal to the stadium’s decision-makers.

“I think all sports arenas, stadiums and complexes all operate in kind of the same way. … [Maintenance Mart] having experience knowing those kind of buildings and how we operate was definitely a plus,” says Callender.

That being the case, the story of how a company like Maintenance Mart became the official jan/san supplier for a Super Bowl starts long before 2013. It requires a trip back to 1988.