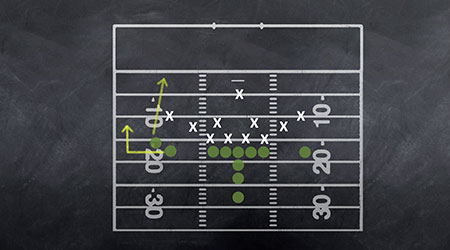 We always enjoy reporting on impressive feats of custodians, ranging from saving a school from potential flooding to getting a movie made after them for creating the flavor of Flaming’ Hot Cheetos. Those who are sports fans — particularly football — are certain to enjoy this one.

Earlier this month, as Kansas City Chiefs Head Coach Andy Reid was reflecting on some of his favorite NFL memories ahead of the season opener on 610 Sports KC’s “Fescoe In The Morning Show,” including one of his favorite plays ever proposed to him and actually used in a game. As reported by CBS Sports, Reid called back to his assistant coaching days with the Green Bay Packers from 1992-1996 where he recalls an ambitious janitor who would always stop by his office to offer up play ideas.

Reid, being open to new schemes and strategies wherever he could find them, didn’t show the custodian the door. Instead he heard him out each week when he’d stop in to Reid’s office. On one occasion, he presented the janitor a big play card typically presented to scout team players to learn plays during practices. The play drawn up caught Reid’s interest — to the point where it was actually dialed up in a game.

Reid had to convince Mike Holmgren, head coach of the time at Green Bay to run it after learning the source of it, but sure enough he gave it the green light. The result? A touchdown. Reid says it likely the most fun he’s ever had in his two-decade plus coaching career dialing up and running plays. While it hasn’t been used since, he adds that there were multiple situations where he was tempted to.

In other NFL-related news, check out this coverage back from Super Bowl Week about an unsung custodian back in the day named Tom Brady.