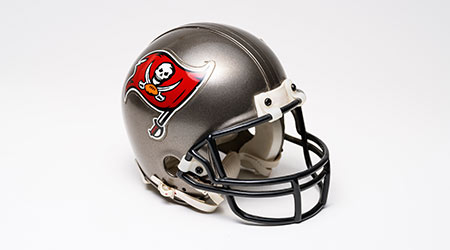 When Tom Brady steps onto the field Sunday for the Tampa Bay Buccaneers, it will remarkably be the 10th Super Bowl in which he has played. Brady, regarded by most as the greatest quarterback in the history of the National Football League, stood out in a much less glamorous job before becoming a professional quarterback. According to a report by Yahoo! Sports, Brady was a star employee at a college job that required him to clean toilets and more.

In 1997, Brady, then a 19-year-old student at the University of Michigan, took a summer job with a local construction company so that he could supplement the bills that remained after his scholarship money was used. Since there was no time to train the seasonal hand to operate heavy machinery, Dudlar & Sons Construction had Brady clean up work sites. The company made a habit of hiring University of Michigan student-athletes for this type of work, but some couldn't last a single day, let alone entire summer. Brady, on the other hand, had no issue with thankless manual labor. He cleaned the urinals, toilets and everything else in the restroom of an auto parts factory made filthy by construction materials and the other stuff one would expect to be in a restroom. He would also scrub ceilings and haul bags of cement and other supplies in wheelbarrows from point A to point B.

The owner of the company, Frank Dudlar, remembers his son telling him at the time that the lanky, 6'4" college kid working for the company was "the best worker we ever had," according to the Yahoo! report.

Other jobs Brady had before being drafted by the New England Patriots in the 2000 NFL draft included tossing newspapers out of the window of his mom's van in elementary school and working at golf courses in Ann Arbor, Michigan.

Brady hopes to claim his 7th Super Bowl ring on Sunday night. If he doesn't, know that it won't be because of his work ethic.