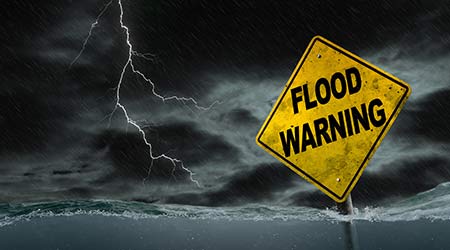 Just like many of our Faces of the Frontline recipients, a custodian for Hackensack Middle School in New Jersey stepped up in a big way earlier this month through an unprompted contribution. When the reverberating effects of Hurricane Idea approached the northeast, head custodian Peter Hemans was well aware of the potential water damage looming for the school if no action was taken.

Without anyone asking him to do so, Hemans decided to venture to the school after receiving an alert Sept. 1 that water was leaking into the basement, NPR reports. Taking an improvised route to navigate past several flooded streets, Hemans eventually reached the school after more than an hour to check on the status of emergency sump pumps. The efforts didn’t stop there though, as he decided to stay at the school over night to make sure they were still functioning thorough periodic checks.

Sure enough, his intuition paid off: he discovered on of the outlet hoses sending water outside was feeding directly into an already-flooded area, which could have led to severe damage if not attended to.

With school starting the next week, his efforts could have very well saved that from not being the case. Hopefully someone bought him coffee after his restless night! The school made sure to acknowledge him on their Facebook page either way.