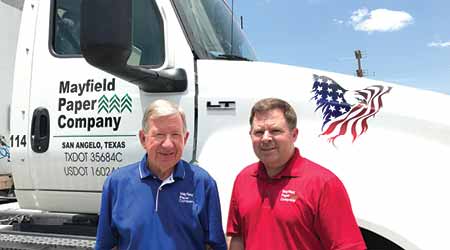 Just as the oil-fueled economic booms come and go, so have Mayfield’s distribution customers. But when Stanley Mayfield’s customers pick up and leave town for greener pasture, Stanley isn’t always willing to let them go.

“Mr. Mayfield is interested in taking care of his customers,” says Mark McCraney, a sales rep for Mayfield’s Odessa branch who has worked for the company for almost 32 years. “If they’re going to pick up and move on, if they’re the kind of customers we want, then he’s going to go along. Call that aggressive, but to me it’s just being really smart and very supportive.”

That philosophy took Mayfield Paper to Odessa in the early 1980s, then to Lubbock just a few years after that and then to a sixth location in Amarillo around 2004.

Along the way, John Edward threw his hat in the ring. He grew up sweeping the company’s San Angelo warehouse and mowing the grass. At age 13, he started receiving a paycheck for converting master rolls of gift wrap down to smaller retail rolls.

“I was like, ‘Wait a minute. I already know how to sell vacuum cleaners. I’m not getting an aerospace engineering degree so I can sell vacuums,’” says John Edward.

So he decided to change majors to business and head back to Texas, enrolling at Texas Tech University while working at Mayfield Paper’s brand new Lubbock branch. John Edward then transferred to Angelo State University in San Angelo and worked out of a home office as a sales rep for Mayfield Paper.

By his senior year, the company was making plans to open a branch down in San Antonio, and John Edward was already making drives down after class on Fridays to help build up a customer base. He walked in his commencement ceremony in May of 1993, he got married in June, and when he returned from his honeymoon on July 1, he started as branch manager in San Antonio.

Since then, John Edward and his family have moved to Wichita Falls to open Mayfield Paper’s seventh and newest branch in 2010.

“The flying is still in my blood, but I came back to this and I really do enjoy this business,” says John Edward. “Obviously being a family business, it has ups and downs. A lot of those down times, being a pilot looks real good to me all of the sudden. But then I think, ‘You know what? This business is good.’ I love being around people and this is a people business. And I believe, like my father does, whoever has the best people working for him will win at the end of the day.”

With John Edward in the fold, there are now three generations of Mayfields that have worked for the company. And it isn’t only immediate family either — John Edward’s brother-in-law Brian Barker is the company’s sales trainer.