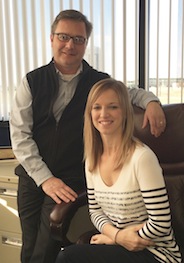 Tiffany Sarmiento, procurement director at Springfield Paper Company in Springfield, Missouri, won the company’s Sales Person of the Month award for 10 of the 12 months from November 2013 to October 2014. That 12-month period included three months where Sarmiento was on maternity leave for her second child, Santi.

Yes, that’s correct; Sarmiento won Sales Person of the Month while she was on maternity leave. She actually won the award for two of the months she was on leave. In fact, Sarmiento was even answering phone calls and recording product orders while she was in the hospital.

“I didn’t know she was doing that,” says Kevin Smith, Sarmiento’s father and general manager at Springfield Paper Company. “I must have been in the hallway or eating lunch.”

Because she never really stopped working, Sarmiento says many of her customers were unaware she was in the hospital.

“Half of the people didn’t even know I had a baby, and then when I talked to them afterward, they were like, ‘Wait, when did that happen?’” she says.

From the time she started at Springfield Paper Company three years ago, Sarmiento, who also has a 7-year-old son named Alejo with her husband, Luis, has believed customer service is about adapting to her customer’s needs.

Sarmiento has a degree in psychology and biomedical sciences. But she had received a taste of the sales world through some previous experience in real estate. While she was enjoying a career in the mental health field, she began to miss the sales environment. So when an opportunity arose with Springfield, she jumped at the chance.

In an effort to avoid favoritism, Smith says he assigned Sarmiento the company’s weakest sales territory.

But neither that, nor a lack of janitorial product knowledge, could slow Sarmiento’s rising star. New salespeople typically take five to eight months to move from a salary to a straight commission-based pay structure, says Smith. Sarmiento did it in three.

“Once you know how to connect with people and have good customer service,” she says, “the product itself doesn’t necessarily matter.”

Sarmiento says she has a unique sales style. She didn’t try to immediately learn every little thing about the industry. Instead, she met with as many people and asked as many questions as possible.

“Instead of trying to go into each customer acting like you know everything, be open to them explaining to you,” says Sarmiento.

She spent much of her time on the phone, researching the decision makers and establishing numerous initial relationships instead of filling up her schedule with a handful of in-person cold calls that probably wouldn’t work out. She also focused on larger accounts.

Not everyone agreed with that style, says Smith. Not long after starting at Springfield, the ambitious Sarmiento aimed to land a large grocery store chain in the area. The account was long considered too large for a company Springfield’s size. Despite doubts from the other salespeople, Sarmiento wasn’t deterred and eventually landed the account.

“They were trying to discourage her,” says Smith. “She proved them wrong.”

Eventually, Sarmiento was able to attain her goal of establishing a book of accounts that are essentially self-sustaining.

After all, she says, it wasn’t her filling orders while in the hospital that earned her multiple sales awards in those few months of maternity leave. It was the groundwork she had laid up until that point.