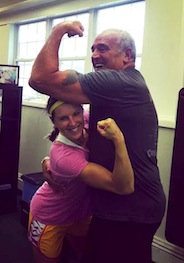 Even at 69 years old, Al Crisafulli never stops improving. He runs four miles a day. He recently set a new personal deadlift record, hoisting 425 pounds up off the ground.

His betterment exploits don’t stop at the gym, either. As a territorial manager for ATRA Janitorial Supply Company, Pompton Plains, New Jersey, Crisafulli continues to endeavor into independent study and participate in product knowledge seminars, just as he did when he cofounded ATRA in 1983 with his twin brother Tony Crisafulli.

It’s a lesson he’s passed on to younger employees, including his nephews Anthony and Jason Crisafulli, who have since stepped into leadership positions for the family business. Anthony says he and his brother still use that approach.

“Our younger sales people are all trained the way ATRA’s first generation of Crisafullis learned and taught us,” says Anthony, the company’s president.

Al and Tony got their start at another jan/san distributor, which is now a competitor. It was there Al says he learned that the best way to go to market was by knowing more about his company’s products and his competitor’s products.

“I believe the expert is the guy who knows one thing more than the person he’s talking to about a specific subject,” says Al.

That philosophy helped him rise through the ranks. He started out as a truck driver at age 17, moved to the inside sales showroom, was eventually assigned a sales territory and finally became sales manager. By then it was time for a change.

“After 20 years, I decided I’d rather do be doing this for myself,” says Al.

He and his brother founded ATRA, which stands for Al and Tony Return Again, using what they learned at their previous employer.

To this day, ATRA still holds regular product education sessions, bringing in manufacturer reps and even chemists to explain what makes a certain product better.

Al points to this thirst for knowledge as his reason for success. But Anthony credits Al’s passion for the industry and his understanding of his strengths for lasting this long in the business. In fact, Al sold off his shares of the company to Tony, Anthony and Jason about 12 years ago, which allowed Al to focus on being the company’s top salesman and growing his territory.

Tony retired from ATRA in 2011. Al and Tony’s other brother, Joe, also works for the company and is planning his retirement. But there’s no end in sight for Al. He won’t even talk about retirement when Anthony tries to plan for that day.

Al says his father retired at age 59 and passed away shortly thereafter. And he knows a lot of guys who sit at home with nothing to do and are sorry they retired.

That won’t be Al.

“I’m still in good shape. I feel great. And I’m able to do everything I need to do. I play as much golf as I want. I live right on the golf course. I travel with my wife,” he says. “And I still have that fire.”