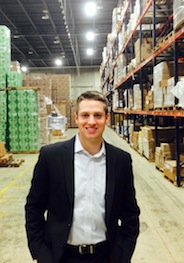 Until about four years ago, Ben Wright was an assistant golf pro at Jupiter Hills Club in Tequesta, Florida. He learned how to deal with a wide range of personalities, identify a client’s problems and make that client feel comfortable.

One of the country club members was D. Ames Shuel, founder of Indianapolis-based HP Products, who quickly became impressed with Wright.

“I think part of it was just the relationships I was able to build with the membership there,” says Wright, “and it sounds like he thought that would be a fit for customers in his organization.”

It turns out those relationship-building skills apply to more than just golf lessons. Today Wright, a systems consultant for the HP Products branch in Belleville, Michigan, is consistently leading the company’s sales force in most of its product categories.

Wright, who is originally from the Detroit area and earned his degree in human resources and communication from Oakland University in Rochester, Michigan, started out with HP Products by working in customer service for about a year. He saw how the warehouse operated, worked with the company’s truck drivers for a time and learned about the products. He eventually made his way into outside sales, where he began working for John Holden, HP Products’ vice president of sales for the state of Michigan.

“We had a territory open up and assigned Ben to several of those accounts,” says Holden. “He basically took over an experienced salesperson’s territory, and the territory grew within the next year.”

That territory included the down-on-its-luck city of Detroit.

“The national media paints a horrible picture of the economy in southeast Michigan, namely Detroit, but Ben has found a way to grow his business by 26 percent in 2013 and on pace for 29.6 percent in 2014,” says Holden.

Wright has accomplished this by turning his perceived weakness into a strength. Because he doesn’t know any one of the company’s product categories better than another, he feels equally comfortable selling all of them — something not done by all of HP Products’ sales reps, says Holden.

“I think it’s just asking the right questions and being OK with telling the customer I don’t know the answer right then,” says Wright. “I kind of pride myself on quick follow up and bringing the experts with me.”

According to Holden, Wright consistently leads his branch’s 11 salespeople in most of the company’s eight product categories: Packaging, Safety, Laundry and Dietary, Equipment, Textiles, Coffee, Cleaners, and Bioaugmentation.

For Holden, Wright’s success comes back to customer service. Wright has “never met a stranger,” says Holden, which is why Wright was able to come in and find so much success despite having no background or formal education in sales.

“He basically was in a customer service type of position at the country club — just looking for ways to provide a higher level of service,” says Holden. “I definitely think he brought that with him when he came to HP.”