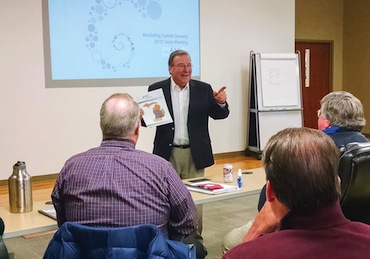 Like most distributors, KSS Enterprises had a veteran sales force. About three years ago, the company began hiring recent college graduates in an effort to get younger, says Ed Stasiak, vice president of KSS.

As many distributors are discovering, Millennials bring a different mindset to the workplace. But they fit right in with 71-year-old Tom Jeannette, sales team leader at the KSS branch in Plymouth, Michigan.

“When technology first came along,” says Jeannette, “I looked at it and I thought to myself, back in the day when Henry Ford came out with the car and there were people who still had their horse and buggy, some of those people said, ‘You know, I’ll stick with the horse and buggy,’ and they got left in the dust.”

Jeannette makes it his mission to keep up with new trends. He teaches a seminar at KSS trade shows called “Cool Tools” on how technology can help sales reps do their jobs more efficiently. In the field, if a customer needs a new part for a floor scrubber, Jeannette pulls out his phone, takes a picture of the broken piece and texts the picture to the KSS service department. He even has half a dozen customers who correspond strictly through text messages.

“I call them my texting ladies,” says Jeannette. “You can call them all you want, they don’t answer their phones. If I text them, I get an answer back immediately.”

Jeannette joined KSS five years ago, after his previous employer had gone out of business. Jeannette made it his responsibility to find work for his team, which consisted of four sales people and a general manager, some of them his senior.

“Somebody has to lead,” he says. “I wanted me as well as the other people there to land with our feet on the ground, rather than floundering out there from a company that just went out of business. So I just took the reigns and said this is what we need to do and where we need to go.”

Jeannette facilitated the entire team’s employment, even negotiating a commission structure. One member of that team has since retired, but the rest still work for KSS.

Jeannette sees himself as a mentor for both young employees, teaching them about sales and the industry, and older employees, encouraging them to adopt the new technologies and processes.

“I’ve got a lot of experience,” says Jeannette. “I’ve been beat up and pushed around, so I know the things you shouldn’t do and the things you should do. And I truly enjoy sharing those with the younger people in the company. They’re on their way up, and I’m at a point now where it’s not all about a paycheck, it’s about what I’m going to leave behind with these people.”

Pro-Link Regional Manager Brian Faut says Jeannette has the younger sales reps’ ears because he’s shown the ability to adapt as the industry has changed.

Jeannette, on the other hand, evolves.