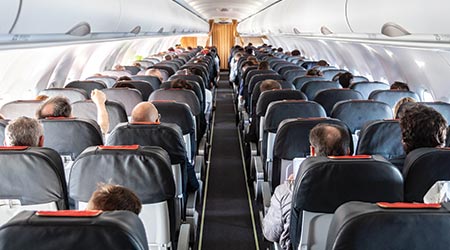 Flight attendants find all kinds of gross things in the seat pockets of planes, including used tampons, sandwiches, loose condoms and dirty diapers. So it’s particularly disturbing to know that these pockets aren’t even the germiest part of the aircraft.

According to Weather Network reporting, that dubious honor belongs to the headrests.

The findings are a result of samples taken by CBC News (Canada) staff during 18 short-haul flights between Ottawa and Montreal. The team flew with Canada's three major airlines — Air Canada, WestJet and Porter — at various times throughout the day. On each flight, the seatbelt, tray table, headrest, seat pocket and washroom handles were swabbed and those samples were analyzed.

Nearly half of the surfaces swabbed contained levels of bacteria or yeast and mold. The most contaminated surface on the plane was the headrest, which was found to include hemolytic bacteria, mainly associated with strep throat, and staph.

E. coli bacteria — which indicated fecal contamination — was found both in the seat pockets and on the headrests.

Flight attendants and other airline staff whose job it was to clean the planes between flights said there wasn't enough time to properly disinfect an entire aircraft. Cleaners typically have less than 15 minutes to turn a plane around. There's also no time between flights for staff to use cleansers or antibacterial spray, and cleaning solutions are often not allowed on board.

Tray tables are also germ magnets and may likely include a kind of staph bacteria that could cause skin and soft-tissue infections, such as boils, the article said.

Experts urge passengers to avoid putting their faces down on the tray table to sleep, and never placing food directly on the table surface.

Germs associated with air travel is not new. Travel and Leisure often exposes dirty truths. Here are just a few of their findings, which highlight airplane restrooms, drinks that use tap water, as well as hot spots found in airports.