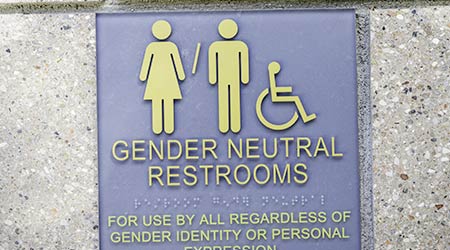 The New York Times has introduced gender neutral bathrooms to their Manhattan, New York, headquarters, according to an article from The Wrap.

Restrooms on the  newspaper's 14th floor are gender-neutral, accessible, single-person units. A lock on the main door has been added for privacy during use, wrote executive vice president of Talent and Inclusion Ellen Shultz in a memo to staff. The Times also plans to create single-person restrooms on the 2nd and 8th floors of its building.

The memo told staffers that they are welcome to use any bathroom that matches "their gender identity or expression.”

Originally reported by KFOX214, the bill would require many existing or newly constructed, single-occupancy, public restrooms to be accessible regardless of gender identity. Any facility that provides services to the public would also be required to post “gender-neutral signage.”

Plus, in Maryland, schools are embracing the change. For example, the Bethesda Beat reported that the Montgomery County Public School system is looking into establishing “all-gender” restrooms to increase privacy and discourage bullying. Gender-neutral bathrooms generally include a single stall, whereas all-gender restrooms are designed with several stalls.

In Illinois, the State Senate is considering a bill to require single-occupancy restrooms throughout the state in schools and businesses with public accommodations to be gender-neutral.

In addition to the gender neutral restrooms, the Times also announced that feminine hygiene products would be added to a number of “wellness rooms” located throughout the building.