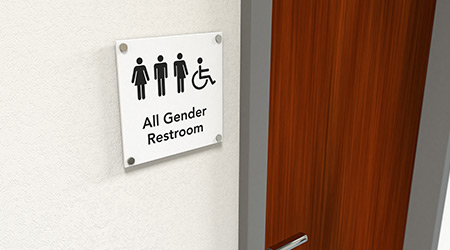 Legislation that could add gender-neutral bathrooms to New Mexico has advanced to the Gov. Michelle Lujan-Grisham’s desk, according to KFOX214 reports. If Grisham signs the bill, it will go into effect July 1.

The bill would require many existing or newly constructed, single-occupancy, public restrooms to be accessible regardless of gender identity. Any facility that provides services to the public would also be required to post “gender-neutral signage.”

Private clubs and establishments are not affected. And, even though they are new, facilities built before July 1, 2019, will not have to construct a new, single-occupancy restroom if it doesn’t already have one.

Most legislation surrounding the gender-neutral issue has been in public or commercial facilities. But in Maryland, schools are embracing the change.

For example, the Bethesda Beat reported that the Montgomery County Public School system is looking into establishing “all-gender” restrooms to increase privacy and discourage bullying. Gender-neutral bathrooms generally include a single stall, whereas all-gender restrooms are designed with several stalls.

LGBTQ advocates have peen pushing for the move to support equity for transgender and nonconforming students. Some parents are also urging the school board to construct only all-gender restrooms during future construction and remodeling projects at all county schools.

In Illinois, CleanLink reported that the State Senate is considering a bill to require single-occupancy restrooms throughout the state in schools and businesses with public accommodations to be gender-neutral.