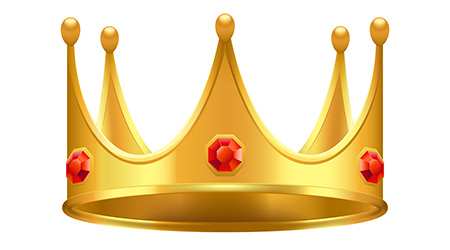 A custodian at Georgia’s Carroll County School System was set to enter retirement, but the kids he served made sure to give him a celebration fit for a king before he could.

John Lockett, 83, was met by a surprise parade of students and staff, all of whom showed their appreciation by throwing a “Mr. John Day” in the hallways he has cleaned for more than a decade, reports WXIA-TV in Atlanta.

The kids kicked off the ceremony by placing a cape and crown on a shocked Lockett. He was then handed a basket and instructed to walk down a hallway, where children waited to hand him goodbye cards. His wife of 25 years assisted in the surprise.

Sand Hill Elementary Principal Carla Meig told WXIA-TV that Lockett is “almost the grandfather at school” and a “positive role model with a warm heart.”

Lockett spent the majority of his professional life working in construction, then joined the district 12 years ago where he has served two elementary schools. His wife tried to get him to retire this past winter due to ongoing health issues, but Lockett insisted that he would wait until the end of the school year to step down. In retirement, he plans to spend more time with his grandchildren.

While Lockett’s story deserves its own headline, it’s one of many where students and teachers join forces to celebrate the men and women who have spent so much time improving their lives. A custodian in Kentucky was called to the gym on Valentine’s Day to clean up a mess, only to find a loving pep rally thrown in his honor. In 2018, kindergartners at a Tennessee school surprised their deaf custodian by performing “Happy Birthday” using the sign language he has taught them.