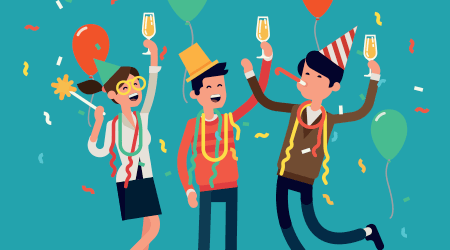 School custodian Ricky Young was recently called to the gym to clean up a “big mess” but instead found a pep rally in his honor. According to Good Morning America reports, inquiries from two students resulted in officials at Tamarack Elementary School, Owensboro, Kentucky, declaring Feb. 14, 2019, "Mr. Ricky Day."

When Young entered the school’s gym on Feb. 14, the 500-strong student body yelled, “Surprise,” and broke into song, changing the lyrics of “Hey Mickey” to “Hey Ricky.”

Young has been a custodian at the elementary school for nine years. He is known for giving students fist bumps, talking to them any time they need and always fielding requests from students who want to help him clean, according to Tamarack Elementary principal Carrie Munsey.

Following the assembly, the teachers and staff pitched in to clean the confetti so Young could take the day off from his normal duties.

Young, a diehard Kentucky Wildcats fan, was also given two tickets to a University of Kentucky basketball game.