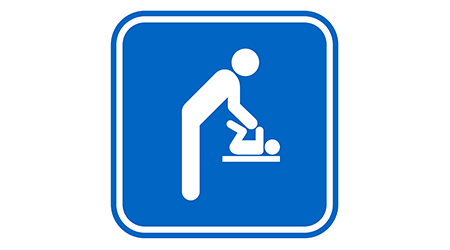 Every June, fathers step into the spotlight as they are praised for all that they do for their children. Unfortunately, not everything they do comes easy.

"Daddy diaper duty is a real thing," says singer John Legend, who is joining Pampers in a campaign to install 5,000 changing tables in public men's restrooms across North America. According to The Hill, Legend will be the voice of the “Love the Change” campaign to get more changing tables installed by 2021.

Legend will be joined by Dante Palmer, the father who started the viral #squatforchange movement in 2018. A photo of Palmer squatting on the floor to change his son’s diaper in a public restroom went viral last year.

In partnership with changing table company Koala Kare, CNN reported that baby changing tables will be added to high-need public locations first. This includes parks and recreation centers, community centers and libraries in cities such as Cincinnati, Dallas, Philadelphia, Detroit, and many others across the U.S. and Canada. The first 500 locations have already been identified and installation is expected to be completed over the coming weeks.

In its announcement, Pampers said that the company's research showed that nine out of 10 dads have gone into a public restroom without a baby changing table. That's changing in New York state where lawmakers recently passed a law that will require buildings to have at least one changing table per gender on each publicly-accessible floor, with signage clearly directing people to the nearest location.

New York Senator Brad Hoylman said he sees the new law as an important step in recognizing changing parental norms, including a new generation of dads who should no longer have to change diapers on the restroom floor.

New York's law is not the first move to reflect these changes. Changing tables in men's rooms were the subject of a push in Washington D.C.’s Capitol buildings in 2018. Tim Hortons restaurants in Canada also began to install changing tables in all men’s rooms in 2018.