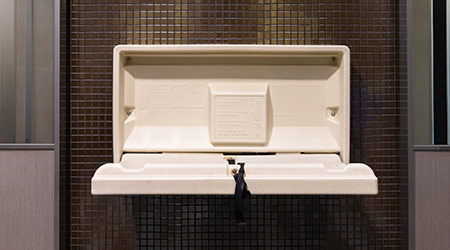 In New York, fathers will soon find it much easier to change their kids' diapers in public restrooms. According to an article on the Fatherly website, the state recently passed a law that will change the building code to require restrooms in both new and renovated buildings to be equipped with “safe and compliant” changing tables.

The new law also will require buildings to have at least one changing table per gender on each publicly-accessible floor with signage clearly directing people to the nearest location.

New York Senator Brad Hoylman said he sees the new law as an important step in recognizing changing parental norms, including a new generation of dads who should no longer have to change diapers on the restroom floor.

New York's law is not the first move to reflect these changes. Changing tables in men's rooms were the subject of a push in Washington D.C.’s Capitol buildings in 2018. Tim Hortons restaurants in Canada also began to install changing tables in all men’s rooms in 2018.

As these tables are installed, gender is not the only issue.

There are specific mounting heights and other Americans with Disabilities Act (ADA) requirements of baby changing stations in restrooms. They must be mounted so that the very top of the changing table surface — when it is opened — cannot be any higher than 34 inches off the floor. There also must have clear floor space in front of it, for a frontal approach. Facing the open changing table, there must be 30 inches wide by 48 inches deep of space.