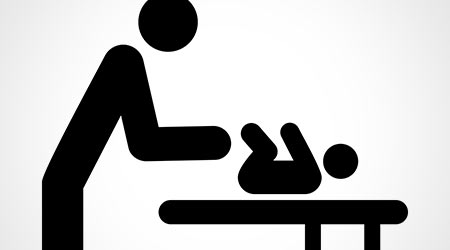 There’s still work to do in D.C.’s Capitol buildings, but at a Tim Hortons restaurant in Canada, changing tables are being installed in men’s rooms to address the reality that men change diapers too.

But changing diapers in the men’s room still can be a messy business, new Capitol parents said in an article on the Roll Call website. Diaper time can turn into a “treasure hunt,” according to some of the newest dads in Congress.

California Democrat Rep. Eric Swalwell, who has 1-year-old son, Nelson, said it is tough to find a men’s room with a changing table. In desperate times, he has had to change his son’s diaper on the floor of the restroom.

He got bipartisan support from North Carolina Republican Patrick T. McHenry, who has had to improvise a diaper change when he brought his 6-month-old daughter, Rese, with him to the Capitol.

The shortage of changing stations in men's restrooms isn't exclusive to D.C. Dads all over  experience similar frustrations. For example, a dad in Canada recently turned to Twitter to share his complaint about the lack of changing facilities in a Tim Horton's (restaurant) men’s room.

According to Fox News reports, Chris Webb, a father of two, unleased on Twitter after he was forced to use the women’s room to change his 14-month-old son’s diaper while at a Tim Hortons in the Montreal suburb of Île-Perrot, because there was no changing table in the men's room.

Tim Hortons apologized and pledged to install a changing table in their men's bathrooms. A spokesperson said the company was rolling out a new design in its restaurants across Canada.