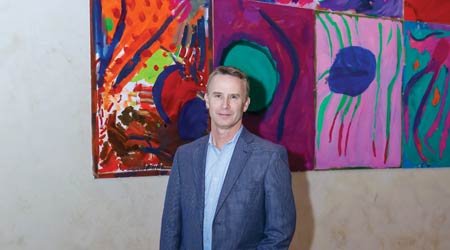 Perhaps it is apropos that the advice Hopkins received that day in Chicago mirrored his Christian sensibilities. Staying true to your word, being honest, always doing “what is right” — these core values translate far beyond a venerable book such as the Bible to personal and professional life. For someone like Hopkins, having faith in both phases is vital.

“Certainly the Bible has a lot to say about how to operate a business and there were things I was hearing — good business principles — that certainly were consistent with things I would see in scripture,” says Hopkins.

As he was completing his MBA, Hopkins decided he wanted to found a commercial cleaning services company that would eventually provide myriad franchise opportunities. In 1992, Hopkins, a young and hungry 26-year-old — and also proud first-time parent — made his newfound vision happen. Office Pride, a business that brands itself as a “no headaches attached” cleaning hub was born.

The infancy of a business is hardly ever expected to be a great success and this proved true for Office Pride, which experienced a slow first year or two. With a foundation laid, it was time to leave a lasting impression on the company. In 1994, Hopkins decided he would do with Office Pride what he had done with everything else in his life to that point: put it in God’s hands.

“It wasn’t until 1994 at a Promise Keeper’s event that I decided, ‘you know what, I’m going to completely trust God with my business. I’m going to turn everything over to him. Whatever he tells me to do, I’ll do,’” says Hopkins.

The decision wasn’t about making his business faith-based, says Hopkins. Rather, it was a matter of him wanting to run a business in such a way that he felt it was consistent with what God wanted from him.

Hopkins believes he was awarded for this devotion.

“It was almost like he said, ‘Alright, Todd, let me show you what’s possible,’” says Hopkins. “And then he began really blessing the business. We began getting some great customers — good people. I just learned how to pray for favor and wisdom. All those things are critical ingredients to success.”