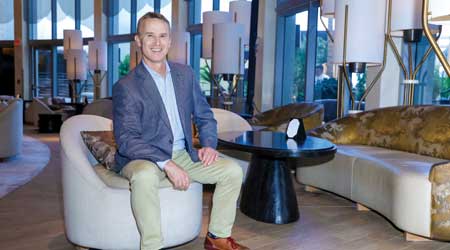 Todd Hopkins, CEO of Office Pride Commercial Cleaning Services, fell for commercial cleaning after studying the industry's franchises as part of his MBA at Butler University. PHOTO COURTESY OF BSCAI

Taking full advantage of time he has between various engagements at the Building Service Contractors Association International’s Executive Management Conference, Todd Hopkins sits with me for a lunch interview at a casual farm-to-table restaurant on the grounds of the bustling hotel where the event is being held. The food comes and everything looks great. We’ve agreed to continue the conversation a bit through the lunch, but there’s a stop. Hopkins asks to pray for the meal, as well as the story being produced. Not a request I’ve ever received during an interview, the question catches me off guard, but this simple act of faith isn’t a surprise to those who work for, or with, Office Pride Commercial Cleaning Services, Palm Harbor, Florida.

Founded by Hopkins more than 25 years ago, the thriving company with franchises in more than 25 states is built upon a faith-based set of beliefs and values. A life-long Christian, Hopkins builds most everything he does around his faith. When it comes to a life in commercial cleaning service, well, that path was a bit less deliberate.

Hopkins wrapped up his undergraduate career knowing he wanted to make an aggressive foray into business. Considering involvement with franchises, but not sure of a particular field, Hopkins began working on his MBA at Butler University in Indianapolis. It was during this course of study that Hopkins came across a woman who held a small cleaning business that was struggling to get by. This interaction gave Hopkins an idea of finishing his MBA with an independent study course exploring commercial cleaning companies. The focus: what the leaders of these companies would have done differently had they been given a second chance.

“I also didn’t have a lot of money to invest in a business, and it seemed like it was a low startup-type industry, so I decided to do a research project on franchising in the janitorial industry,” says Hopkins. “So really, my first interest was to help people start businesses. Franchising.”

Continuing to use connections he made through college, Hopkins nabbed the alumni list of his college fraternity and canvassed it for brothers who currently owned a cleaning business. First stop: Red Carpet Janitorial in Cincinnati.

“When I met with Dale Euller over there, I said, ‘If you had to do it all over again knowing what you know now, how would you start the perfect cleaning service?’” says Hopkins “And he said, ‘The first thing I would do is join BSCAI.’”

Even though his career hadn’t technically started yet, Hopkins says that conversation led him to make his best investment to date: a BSCAI membership.

“One of the first checks I ever wrote after I started Office Pride was to BSCAI for my first year membership dues,” says Hopkins.

As the study continued, Hopkins travelled to other offices in the Midwest. One interview had him heading northwest to Chicago to interview a man whose company was responsible for cleaning what was then known as the Sears Tower. Asking the same questions, Hopkins got another great tidbit of wisdom.

“His advice to me was, ‘Don’t try to act like you know something that you don’t know, to be real and up front with the customer, be genuine. Don’t make promises you can’t keep,’” says Hopkins. “Things like that.”

next page of this article:
Todd Hopkins Puts Company In God's Hands