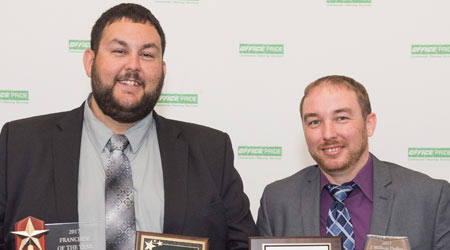 Jason Courtney (left) and Simon Courtney own an Office Pride franchise in Pensacola, Florida. Jason bought the franchise in 2015 after working as a part-time cleaner for the company. PHOTO COURTESY OF OFFICE PRIDE

A quick jump onto the Office Pride website and it’s there at a prominent left center location of the page: A window into what it means to be an Office Pride franchise and what it takes to get there.

“Would you like to live your faith through your own business,” the company asks. A second question on the website reads: “Are you ready to pursue your entrepreneurial goals?”

The first question, the one regarding faith is plenty important. Jason Courtney, who will have owned an Office Pride franchise in Pensacola, Florida, for three years come August, likes the fact that the company he’s a part of follows the same core values he was taught at the church in which he grew up. A company willing to go out of its way to maintain integrity — Courtney’s glad he found that.

While the “faith-based business” moniker is important, it’s the second question pertaining to goals that really speaks to what Office Pride is doing for its franchisees. Hopkins and Office Pride have had, and will continue to have, the opportunity to open new franchises, as made evident by the 131 it has formed in its 26 years — a clip of more than five a year. But franchise creation isn’t even a top priority. As Hopkins explains, the company is fixated on helping every single franchisee to hit their personal and professional life goals — whatever those might be.

“We have franchisees, so my focus is on building a very successful franchise (system) where we can help our franchises succeed,” says Hopkins.

To the delight of Hopkins and owners like Middleton and Courtney, the Office Pride franchises have flourished in recent years. Hopkins says sales figures have rose throughout the company because of the growth of the franchises.

“What we’re seeing is the franchisees we have now, they’re getting bigger,” says Hopkins. “So we like investing time in helping our existing franchises succeed and be the best that they can be. “

In a business landscape where companies are focused on providing perks to new customers, new employees and new franchises, the gesture of helping out those who have already sacrificed so much time means a lot, say the franchise owners.

Middleton was working a middle management position for Fiat Chrysler Automobiles US when he decided he wanted to make a big change in life. In exploring franchising opportunities, Middleton saw companies were interested in selling the franchise units and not much else. With Office Pride the tone was different. Middleton says Hopkins made him feel a true sense of commitment from the company. To Office Pride, he reasons, he wasn’t another number, but rather a person with goals and dreams. Someone who could not only become another success story, but symbol of how hard work and a good plan conceive happiness.