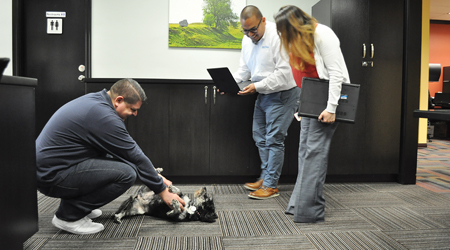 So what’s it all worth? That’s the question many are probably asking. Why do any of this?

The answer, for Miller, is pretty simple: “There’s such a talent war going on that if your people aren’t engaged with you and connected to your business and your mission ... you’ll lose them a lot easier.”

Turnover in the contract cleaning industry typically sits around 100 percent. Miller believes the industry average is closer to 300 or 400 percent.

But for those BSCs who have given some thought to employee engagement, turnover rates can be less than 50 percent. Murch says some of 4M’s accounts have a turnover rate well below 20 percent. Murray, too, has witnessed this benefit.

“Every time I come to ISSA/INTERCLEAN, I hear people with huge turnover rates,” she says. “I don’t have that problem.”

On top of that, less turnover means a workforce that knows the job well, which often means improved worker efficiency. Add in the boost to productivity that comes with happy employees who feel as though they have a stake in the company’s progress, and the numbers become hard to ignore.

“We do not have a sales team and our business grew 23 percent this year by referrals,” says Miller.

The question then becomes, what sort of investment — financial or otherwise — does employee engagement require? Many BSCs are finding success with low- or no-cost engagement strategies. But the reality is even if a BSC chooses to start a program that requires some financial commitment, most BSCs are seeing that initial cost recouped through savings over time.

“When you have turnover as high as our industry average is, that’s very expensive,” says Miller. “It’s expensive in losing customers, because of not getting the results they’re wanting, because you’re having different people all the time; it’s expensive in training; it’s expensive in all the pre-hiring tests and everything you do. So when you exchange, instead of those costs, investment into the people … instead of defense, it’s offense.”

Every BSC is concerned with return on investment. Miller admits that it’s hard to gauge the return on investment directly from an employee engagement program. It’s not exactly a line-item expense that can be tracked. Some of the engagement ideas mentioned were more intangible, perhaps requiring a business owner’s time rather than money. Other ideas may take time to play out, making them difficult to monitor.

To a certain degree, employee engagement programs require something of a leap of faith by BSCs. But that, says Miller, is what being a business owner is all about.

“You have to look at the big picture,” says Miller. “Business owners are always interested in the bottom line. … Because I’ve done it, I’m seeing improvement in every area.”

previous page of this article:
Compensation And Benefits Still Matter