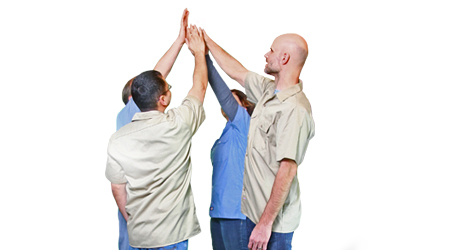 There was a picture circulating in the news just before the holidays. Soda cans and food containers were overflowing from a waste receptacle in the middle of an airport concourse. It looked as though at first travelers were attempting to balance their refuse on top of the overstuffed trash can. Then it seemed someone placed a shopping bag next to the trash can, but the bag was soon overflowing with garbage as well. Eventually it appeared as though travelers just gave up and began dropping their trash sort of near the pile. A few feet away, a woman dragged two suitcases behind her, navigating the loose food wrappers and paper cups that covered nearly the entire concourse.

Apparently, janitors at the airport went on a five-day strike. That was all it took to create the eerie scene — five days without cleaning.

This is the scene Tim Murch, president and CEO of 4M Building Solutions, St. Louis, has been trying to paint for his workers every chance he gets.

That conversation between employer and employee, and more specifically that look on the cleaner’s face? Building service contractors are increasingly referring to it as “employee engagement.”

The concept, in practice, is a little different for every BSC, but as a starting definition, employee engagement is simply an employer finding creative ways to get its workers to willingly care about their jobs.

Ingrid Murray puts it this way:

“Excrement pays,” says the president and CEO of Prospect Cleaning Service, Brooklyn, New York. Only, she used a different word for excrement.

One day, Murray’s typical restroom cleaner at a particular facility couldn’t come to work, so she tasked another worker with cleaning the restroom. That worker had never cleaned the restroom, and he didn’t want to do it then. Murray understood why: There’s a stigma attached to a restroom cleaner.

“People tend to look down on people [who do that work],” she says.

So she delivered a variation of the above catch phrase and explained that by doing this job, he was allowing other people to successfully do theirs.

“He didn’t understand that it’s not a job you look down on, but an essential service, just like a doctor healing somebody,” says Murray. “He became one of my best bathroom cleaners.”

The point here is simple: It’s human nature — for workers of any generation — to want to feel valued, to want to make a difference. And it doesn’t require much from an employer.

“It’s pretty amazing,” says Mary Miller, CEO and owner of JANCOA Janitorial Services, Cincinnati, “when we do the right thing for the right reasons how things do have a tendency of working out.”

The strategies behind employee engagement, however, are where this gets interesting.

next page of this article:
Understanding The Value Of Happy Employees