Infectious Diseases Can Spread In The Workplace 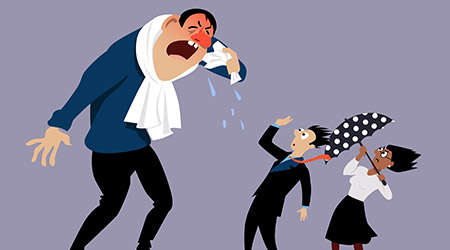 Many believe that the Civil War advanced medicine into the modern age. Nurses, surgeons, and physicians had to deal with new medical challenges. Both sides, the Confederate and the Union, were devastated by battle injuries and disease. The numbers were greater than history has ever experienced. Crowded, unsanitary camps led to many illnesses, namely syphilis and dysentery. Of the approximately 620,000 soldiers who died in the war, two-thirds of these deaths were not the result of enemy fire, but from disease. Health care professionals had to re-evaluate how to treat wounded and diseased soldiers in order to develop safe efficient practices of health care.

Over the years, medical treatment and care has made monumental improvements. After WWII, one of the greatest health care educational advances was created. In 1946, the Centers for Disease Control and Prevention (CDC) was formed. The CDC is the leading national public health institute of the United States - its goal is to protect public health and safety through the control and prevention of disease, injury, and disability. One of the CDC's main focuses is on infectious diseases.

Even with today's medical advances, infectious diseases are a continuing danger in society. Cholera, Ebola, hepatitis, HIV, and legionella are a few of the most commonly known infectious diseases. Some diseases have been effectively controlled with modern technology. New diseases, such as SARS and West Nile virus infection, are constantly appearing. Others, such as malaria, tuberculosis, and bacterial pneumonias, are now appearing in forms that are resistant to drug treatments. The CDC continues to study these diseases and develop strategic plans for their prevention and mitigation.

SCOTT HAMILTON is Senior Director of Competency Development Services for IAPMO Training and Education. A 25-year veteran of the trades, Hamilton joined IAPMO Training and Education after holding the position of ASSE International Executive Director and serving the prior 14 years as president of Plumbers Union Local 75 in Milwaukee, for which he also served as training director of the Educational Fund since 2004. A graduate of the University of Wisconsin, Whitewater, Hamilton completed the United Association's Instructor Training program and has been teaching for more than 20 years.