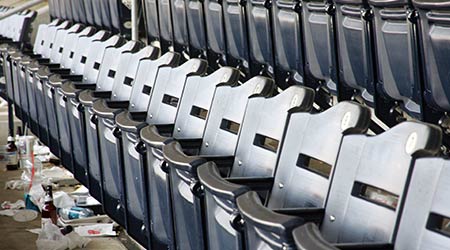 Modern stadiums and arenas are very busy places. They have to be to pay the rent. But cleaning up during and after the events can be difficult for the maintenance team unless there is a well-thought out process and clearly communicated procedures.

First priority is taking care of trash. The reason is simple – big events generate huge amounts of trash. Many stadiums and arenas have adopted a three-step process for trash management: picking, sorting, disposal. Those facilities that also put an emphasis on sustainability and low environmental impact utilize four different waste streams: landfill, compost (food products), recycle, and cardboard. The objective is to minimize the landfill stream and maximize the other three.

By finding ways to combine the pick and sort functions, savings can be found in both manpower and costs. For instance, use trash containers with three separate bins for paper, bottles and cans, and waste. Patrons appreciate the fact that you want to recycle and responsibly dispose of their trash. As a result, they don’t mind doing the sorting for you.

After a game or other large event, some of the new facilities do just one pick of trash in the seating bowl instead of the traditional two picks (one pick for recyclables and a second for the other stuff). Because they have the space, they set up a roomful of tables and sort by hand, which can be more cost efficient and effective than the two-pick method.

Finally, use green cleaning products – degreaser, glass cleaner, etc. – for as much as possible except actual sanitizing. And if time allows, after every large event, try to do a full scrub of the stadium with special attention paid to the porous surfaces such as concrete floors around food service areas and rest rooms.

Chris Braden is the housekeeping director at Levi’s Stadium for ABM. He has been working in the sports and entertainment field for a decade and got his start volunteering for the Cleveland Browns and Cavaliers in 2006. Prior to joining ABM in 2011, Braden was an assistant engineering manager at FirstEnergy Stadium.