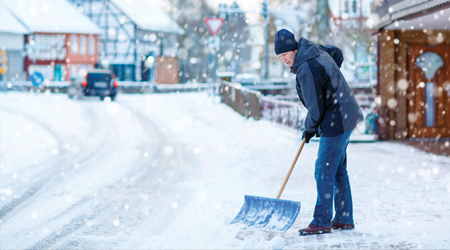 Although ice skating can be fun in the proper setting, most people prefer not to do a double axel while negotiating slick sidewalks and parking lots. Clear, safe surfaces help cleaning facility managers and building service contractors prevent potentially costly slip-and-fall lawsuits and protect property. That means jan/san distributors are wise to spend time educating customers about ice melt products and how to properly use them.

Unless a customer is well-versed in the science of ice melt products, it’s probably best that distributors start with the basics. To put it plainly, ice melters attract moisture to themselves to form a liquid brine, which generates heat and melts ice. The brine breaks the bond the ice has with the pavement so it can more easily be shoveled away.

“Truthfully, there probably are more people than we realize who don’t know how to use ice melt properly,” says Jim Smith, executive vice president of HP Products in Indianapolis. “They need the right product for the right job in the right location.”

What is the right product?

“Price, effectiveness and sustainability are big factors. We want to be helpful, but we try not to confuse customers,” says Chris Nolan, president of HT Berry Company in Canton, Massachusetts. “If price is a concern, sodium chloride or rock salt is plentiful and cheap, but it’s not very effective. You get what you pay for,” says Nolan.

Rock salt will melt snow and ice at temperatures down to about 15 degrees Fahrenheit.

“A disadvantage of rock salt is that it sticks to shoes and ends up inside buildings and vehicles,” says Nolan. “Proper matting is required outside and inside.”

Unlike sodium chloride, calcium chloride and magnesium chloride are both used for melting ice at extremely low temperatures. Calcium chloride is the lowest temperature deicer; it will melt ice to minus 25 degrees Fahrenheit, but it can be hazardous to animals and cause skin and eye irritations for humans. And if tracked into a building, calcium chloride can leave behind an oily film, says Jack Loughrey, account manager for Dalco in New Brighton, Minnesota.

Magnesium chloride is more eco-friendly than many other ice melt products, which is a strong incentive for an increasing number of consumers. It has been shown to be less irritating to animal paws than either salt or calcium chloride.

Potassium chloride is actually a nutrient to plants when used in moderation, so environmentally conscious people will sometimes pick potassium chloride as an ice melter. However, it isn’t effective at extremely low temperatures unless mixed with other ingredients.

Blends of ice melters are also available, but it’s important that distributors know what exactly is in the blend before touting them to customers. For example, if the blend is a mix of 90 percent rock salt with 10 percent calcium chloride, it will only be as effective as rock salt, despite the claim of the premium ingredient.

next page of this article:
Don’t Overuse Deicers