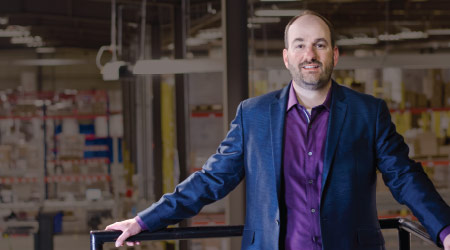 Oliver Denoff wanted his own business from a young age. In 2001, he made that wish a reality Photo Courtesy of SupplyDen

Oddly enough, it all started with a paper route.

Well before Oliver Denoff founded SupplyDen in the Northwestern outskirts of Detroit, he was delivering the front page news like so many other kids. This first job taught Denoff how hard he had to work to earn money. He had to be courteous, punctual and consistent.

It didn’t take too many trips on his paper route for Denoff to realize what he wanted from his future: to run a business and do it right. But before he could do that, he’d have to gain some experience.

As an adult, Denoff learned the janitorial supply industry working in sales for a large midwestern distributor. Like his paper route, this job would also be influential because it taught him about products and how to pitch them. Denoff learned how to really listen to a customer’s needs in order to give him or her the best solution possible. To succeed, he found out, a business needs to keep its customers happy.

“If you can service customers well and timely, you get business,” he says.

After years of working for someone else, Denoff decided in 2001 to form a janitorial supply company of his own. To the outside eye the timing of the move might have seemed a little suspect. Yes, Denoff made sure that he knew a lot about the industry before going out on his own, but there is always the risk of the unknown. And this might have not been the best time to be risky given his growing family.

Still a young man, Denoff and his wife had one small child, Mackenzie (and would later add a son Phoenix), so profits were needed sooner rather than later. Even if the new business was able to turn a profit in the early stages, he’d likely have to spend many hours at work launching the company, meaning less time with his family. But Denoff was able to make the jump and fulfill a dream due in large part to the help of his wife, Tina. He says Tina was extremely supportive and that the business wouldn’t be where it is today if she wasn’t.

SupplyDen started with just Denoff and one other short-term employee. As a result, Denoff’s long hours were quite interesting — the role he’d be playing at 10 a.m. could very well be different than the one he was executing a half hour later. He had to do office work, make a sales pitch — he even drove the delivery truck every so often.

Although launching a company and raising a toddler at the same time was extremely difficult, being a new parent provided Denoff with unique insight as a business owner. As a new father, Denoff says he had to learn early on how to be one of two leaders of a child, making sure that his kid got every bit of guidance needed to succeed in life. This duty as a parent is similar to that as a company president, owner, manager, or boss in that a person is no longer responsible for just his or herself. Through parenting, people learn to be patient, supportive, compassionate, flexible, self-aware, inspirational and decisive — all traits needed to be a successful leader.

next page of this article:
An Emphasis On Business Ethics