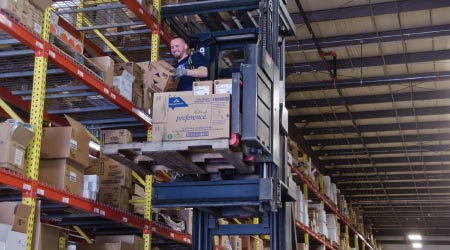 Career experience also helped Denoff to make SupplyDen a success quickly. In his earlier work as a sales rep, he got to see how different businesses were operated, which helped give him an idea of what he liked and didn’t like about a typical company. Denoff doesn’t like to speak of past experiences or companies he dealt with, so he avoids talking about bad traits he has noticed. Instead, he focuses on what good companies do, and for him, the first thing that comes to mind is the proper treatment of employees.

Respecting an employee means respecting his or her life, both at and outside of work. While in the office, Denoff prefers providing face-to-face interaction.

After an employee leaves for the day, Denoff believes he or she should be afforded time to be with family. And if something important at home suddenly pops up during normal work hours, he feels employees should often be granted the right to tend to those things, too. Denoff says companies can’t be punitive with employees when they have personal problems. If an employee’s family member has fallen ill, that worker should be able to be with him or her and offer support. When a worker’s son or daughter has an important soccer game or band performance that they would like to attend, the employee and employer should work together to figure something out.

Doing good by employees helps out a company, too. Denoff says SupplyDen’s turnover is close to nonexistent. This is impressive considering so many in the industry struggle keep employees for long periods of time.

When people don’t leave a business, things run more smoothly. Employees know what they’re doing and management has to spend less time hand holding or seeking a new hire. The relationship between the company and its customers tends to be much stronger, too.

Treating employees with respect and dignity aligns with one of the things that’s most important to Denoff: his faith. Denoff, who is a Christian, turned to his faith before founding SupplyDen. Wanting to be sure starting a company was the right move, he says he prayed a lot for answers. Eventually he got answers — his heart told him a door had been opened and he was meant to take advantage of the opportunity.

“(I was) believing in Christ and thinking that everything happens for a reason,” says Denoff.

Faith also plays a role in the day-to-day operation of SupplyDen, which itself has been called a “Christian-oriented” company. Denoff is a big fan of the Golden Rule — he thinks every person should treat others the way they want to be treated. As a result, customers and business partners are treated with respect and dignity. Honesty, at SupplyDen, is always at the forefront.

“We won’t do something shady to make a buck,” says Denoff. “Not going to happen.”

While Denoff is openly Christian and SupplyDen has a Christian leaning, he wants one thing to be very clear: the company understands that other faiths exist and those beliefs are respected. In other words, SupplyDen will not be push its beliefs onto others.

While Denoff had to work extremely hard to get his company going, he put a similar amount of effort into forming the sales staff he has today. Denoff’s so proud of the sales crew he carefully selected over time that he refers to its members as his sales “dream team.”

Not just any person makes the cut to be on a SupplyDen sales team and there’s reason for that. In his earlier years, Denoff says he made some regrettable hires to that staff. People were hired that simply didn’t mesh with the company. Having learned form those lessons, Denoff worked up a list of traits he wanted all members of his staff to possess and not possess.

A sales manager can coach his or her reps up on a lot of aspects of the job, but to succeed at some things, a person must be born with certain traits. Take the desire to make the sale, for example: some have it in their DNA, but the vast majority of humans do not. A person who possesses these instincts to chase down a sale will have the drive to follow through on every possible lead and will be committed to getting things done. They will also be able engage customers and solve problems. With these traits in hand, a candidate might also be prepared to be more than a clock puncher.

After years of perfecting the formula with which it can identify the best sales rep candidates, SupplyDen is understandably hesitant to share its secret methods. However, there’s a little bit the company is willing to share.

“I can say we’re looking for more listeners than talkers,” says Gordy Gillette, the company’s director of marketing and inside sales. “You don’t know what problems you need to solve if you’re not asking questions and then listening to the response.”

Gillette says SupplyDen has discovered the typical customer doesn’t care what information is being thrown at them or how experienced or knowledgable a sales rep is if what they’re hearing does nothing to solve their problem.

“Salespeople who dominate the conversation are not in tune with our customers’ needs, and therefore won’t be successful in our environment,” says Gillette.

In addition to seeking out candidates that possess the traits the company values, SupplyDen also puts strong emphasis on a more organic hiring process that’s driven by employee referrals.