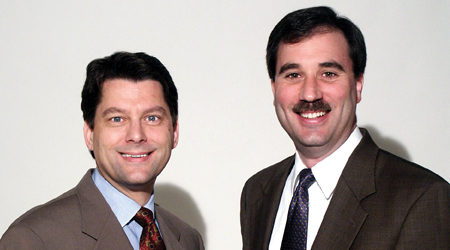 Harry Apple’s son Robert joined the company in 1946 as business manager and, by the mid-’60s, was ready to take over operations from his father. In 1965, Bob Apple was named publisher of Sanitary Maintenance and president of Trade Press Publishing. He was as proud of the magazine’s place as the leading publication in the industry as his father was, and worked tirelessly to maintain that distinction.

As stricter legislation and new government agencies, such as OSHA  and the EPA, began impacting the cleaning industry, Bob Apple made it his mission to keep distributors informed and up-to-date. Throughout the 1970s and ’80s, Sanitary Maintenance carried articles focusing on the latest regulations.

Under the direction of the younger Apple, the magazine modernized with more use of color on its covers and inside pages. Bob Apple was also an early adopter of computers. In the early 1970s, Trade Press was one of the first magazine publishers to use a computer database for its Buyer’s Guide. Even though it was costly to make the change, it was far more efficient.

In 1973, Bob Wisniewski, fresh out of college, joined Sanitary Maintenance in advertising sales. Under the tutelage of Bob Apple, Wisniewski learned not just the jan/san industry, but the publishing business, as well. By 1988, Bob Apple was ready to retire and agreed to sell Trade Press to Wisniewski and a colleague.

“I feel that Sanitary Maintenance will continue to be the leading publication in the industry under new management,” said Bob Apple in his last editorial. “I am sure the new organization will build new life into the magazine and will lead the industry into new programs and be a beacon to the future.”

Like the Apple family before him, Wisniewski ensured that Sanitary Maintenance lived up to the high standards its readers expected. Coverage not only focused on the latest cleaning products, but also major trends affecting distributors. It was common to see articles about the rise of green cleaning and sustainability, industry mergers and acquisitions, the threat and adoption of e-commerce, and navigating a difficult economy.

The internet would forever alter the way companies navigated their markets. Wisniewski embraced this change head-on and adapted from a print-centric publishing model to one that included a plethora of digital products. To reflect the changing industry, he changed the company name to Trade Press Media Group.

Sanitary Maintenance went online in 1997 with the launch of its website CleanLink.com. Following this was a variety of e-newsletters, most recently the daily Cleaning Insider distributors receive today.