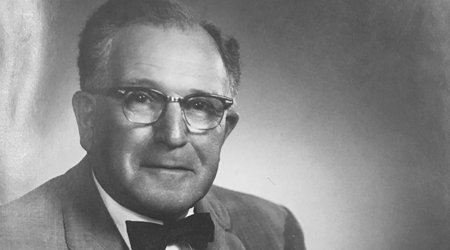 Harry Apple was no stranger to the jan/san industry when he created Sanitary Maintenance in 1943. For 30 years, Trade Press Publishing, the company he founded, had published Brooms, Brushes and Mops, a trade magazine covering a wide variety of cleaning hand tool products.

Early trade publications such as Brooms, Brushes and Mops were tied to a limited product niche. During the early 1940s, however, Apple recognized the important role sanitation was playing in the army camps of World War II, as well as in the hospitals and homes of those back in the United States. He wanted to broaden his reach beyond hand tools, so in 1943, he stopped publishing Brooms, Brushes and Mops, and in its place started Sanitary Maintenance, which would cover all manners of products and aspects of the distribution business.

“The purpose of this magazine will be to bring to the attention of distributors the various new products, which from time to time come into the market. It will carry articles explaining how some distributors are doing a particular job better than other distributors … Every phase of your business should be covered in a manner to educate your salesmen,” said Apple in his National Sanitary Supply Association (NSSA) secretary address at the 1943 convention.

Distributors were ecstatic to have a resource that would keep them abreast of the entire industry and teach them how to improve their businesses. Early issues covered a variety of pertinent topics, including floor care training, sales management, raw materials in cleaning products and association updates.

“Anyone in the distribution of janitor supplies in the early days was on his own,” said John T. Opie of the Opie Brush Co., and NSSA’s first president, in a 1967 letter. “The only way one could improve his knowledge was by traveling from city to city calling on different buildings, see what they were using and get their source of supply. These methods were not changed until our first trade journal appeared on the scene — thanks to Harry Apple.”

The 1950s were formative years for the jan/san distribution industry with the number of distributors rapidly increasing. By the start of this decade, Sanitary Maintenance readership had grown to 3,295 sanitary supply executives — more than twice the subscribers of the magazine’s debut issue.

But it wasn’t just the size of the industry that was changing. New product innovations were rapidly entering the marketplace. Sanitary Maintenance switched to a monthly publication schedule to keep up with all the advances and provide distributors the information in a timely matter.

“The remarkable growth of the sanitary supply industry, the rapid changes in products and the frequent introduction of new products compels the alert sanitary supply dealer to keep posted on the market,” said Apple in a publisher’s statement in February 1950. “Research in maintenance supplies and equipment is making rapid advances. In order to disseminate this information promptly, the industry now needs a monthly publication, and the publishers of Sanitary Maintenance have recognized this need.”

A burgeoning industry translated to prosperity for the magazine. Sanitary Maintenance had the resources to create a number of successful “institutions” for the magazine during the ’50s, helping to solidify its importance in the industry.

In 1954, Sanitary Maintenance published the “Floor Maintenance Manual,” which, for 25 years, would teach distributors how to sell floor care products, as well as train their customers on proper floor maintenance procedures. The success of this publication lead to an entire issue devoted to floor care in 1956. What was supposed to be a one-time special issue turned into an annual Floor Care Issue for more than 40 years.

To kick off 1957, the publication released its first Buyer’s Guide, which soon became the resource for jan/san distributors all-year long. Sanitary Maintenance still publishes a Buyer’s Guide every February, and despite the immediacy of the internet, a majority of distributors still prefer the print guide to the online version.

The very first issue of Sanitary Maintenance featured post-show coverage of the NSSA convention, and ever since then, the magazine provided updates about the association for its readers. Apple always had a close relationship with NSSA, now known as ISSA, dating back to his days as association secretary and the fact that Brooms, Brushes and Mops was named the association’s official publication.

That close relationship continued with Sanitary Maintenance and in 1951, the magazine made its biggest contribution by publishing the “Who’s Who” exhibitor directory for the NSSA trade show in Cleveland. For the next 30 years, this publication served as the official convention guide. Later in the 1980s, the first Sanitary Maintenance ISSA Convention show guide was produced, once again helping to assist visitors with navigating the expansive trade show floor. This unofficial show guide is still produced today.

next page of this article:
Keeping With Commercial Cleaning Trends