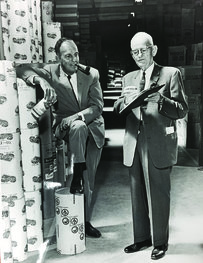 The products Brame Specialty Company has sold have changed considerably since R.L. founded the company in 1924. This is not because subsequent generations have taken the company in a different direction than that envisioned by R.L. The truth is R.L. didn’t know what exactly he wanted to sell back in 1924 — that’s why he named the business “Brame Specialty Company” instead of “Brame Sweeping Compound,” the first product he sold. What’s more, R.L. didn’t want to limit his potential customers.

“Durham was buzzing at that point with industry, with commerce,” says Randy of the influence of tobacco. “So he moved from Oxford, a small farm community, to Durham that was a bustling town.”

The cash crop had turned Durham into quite the business hub in the 1920s, and R.L., a bit of a showman, was prepared to take advantage.

“He was the consummate salesman,” says Randy. “He’d go in and he’d demonstrate the product. He’d have your tissue in a bottle and he’d have his tissue in a bottle. He’d shake the two bottles to show how his tissue would dissolve in water and the competitor’s tissue wouldn’t, so you would have fewer plumbing-related expenses during the course of the year than the other guy.”

After starting with $100, his entire life savings, and a second-hand truck bought on credit, R.L. slowly began adding more products to sell. He’d take the profits from the sale of one product, invest it into another product and so on until he could afford to hire salesmen, a bookkeeper, warehouse workers and drivers.

R.L.’s son J.B. lacked his father’s flare for sales, but made up for it with his trusting personality, eventually becoming president of the local Chamber of Commerce, Merchant’s Association, Rotary Club and other organizations. He even served as highway commissioner for a time.

“He sold on a different level,” says Randy. “Rather than street sales, he went out and sold the benefits of Brame through his character and what he thought was important, which was giving back to the community.”

J.B. joined the business upon returning from a U.S. Navy tour in World War II. He set out to build a brand new facility on the old Washington Street lot and incorporate the company. The postwar period also marked the company’s first expansion, with a branch opening in Rocky Mount, North Carolina, in 1947. But expansion was uneven at times. At one point, J.B. approached his father about adding a second story to the Washington Street office with the hopes of continued growth. R.L. asked, “Well, why would I want to do that?” When J.B. said he wanted to grow the company, R.L. responded by saying, “Son, it’s as big as I want it to be.”

This crushed J.B., who made a point of telling his three boys he would never say that.

Jim, Randy and the middle brother, Bob, grew up playing in the Washington Street warehouse, unloading box cars and, eventually, being trained in the family business.

Jim joined Brame Specialty Company in 1959, while R.L. was still president. Bob, who retired from the company nearly 20 years ago, joined in 1964. Randy jumped on in 1971, three years after his grandfather had died.

This third generation carried on J.B.’s expansion mind-set, opening locations in Wilmington, Charlotte, Roanoke, Virginia, and Richmond, Virginia. The company also opened a retail store named Not Just Paper in downtown Durham. Then in 1991, the Brames built their current 80,000-square-foot facility on Briggs Avenue, across town from the Washington Street location, which is still used by the company.

“Fifty percent of distributors don’t want to grow,” says Randy. “We want manufacturers to know that we want to grow.”

Through the years, the company’s product offerings continued to evolve and diversify, jumping from that original sweeping compound to grocery bags to laundry to warewashing supplies. As time went on, janitorial supplies constituted a larger and larger portion of the company’s sales.

“Jan/san wasn’t even a term when I started,” says Jim.

Jim was heavily involved with the National Paper Trade Association for a time, and as the company’s focus began to shift to janitorial supplies — or perhaps creating the shift — Randy ramped up his involvement with ISSA, eventually serving as the organization’s president in 2004.

Today jan/san makes up roughly 75 percent of the company’s business, and Stanfield has begun to take an active role in ISSA, as well, currently serving as a distributor director.