This is part one of the four-part profile of Brame Specialty Company President Mercer Stanfield. 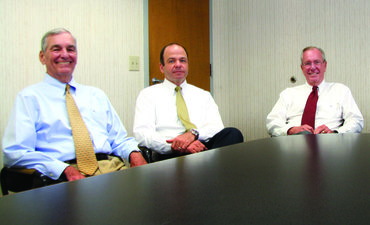 Of course, Randy and his brother Jim Brame had already disproved the maxim by successfully growing Brame Specialty Company, based in Durham, North Carolina, during its third generation. But a few years back, Randy was beginning to wonder if his addition to the saying might be prophetic, as several colleagues in the janitorial distribution industry were having difficulty finding capable and willing successors.

This weighed on the Brame brothers, who were both approaching retirement age and looking for ways to keep alive the company founded by their grandfather.

“We’ve been fortunate. … What made it easy for us was Mercer,” says Randy.

He’s referring to Mercer Stanfield, who took over as company president in 2012. Stanfield is the first person to head the company while lacking the Brame surname. And while he is no insider, anyone who knows the Brame family knows he’s not exactly an outsider either.

The company was founded by Robert Lee Brame, known as R.L., in 1924 and was passed down to son J.B. Brame, then later to J.B.’s sons Jim, Bob and Randy. The boys’ sister, Linda, is a close family friend of the Stanfields. Growing up, Mercer was best friends with Linda’s daughter Caroline. In fact, it was Linda’s son, also named Jim, who landed Stanfield his first job at Brame Specialty Company.

Then, not long after he began working for the family, Stanfield began dating and eventually married Amy Brame, daughter of the elder Jim Brame, who was serving as the company’s president at the time.

“I think he probably got a lot of grief for dating one of the boss’ daughters,” says Jim.

Nothing was given to Stanfield simply because he married the boss’ daughter. He worked his way up the company ladder on his own. Yet in many ways, that connection makes Stanfield the perfect person to captain the Brame ship, as he possesses an outsider’s fresh perspective but the personal stake of an insider. And his willingness to step into any role the company had needed had made Stanfield ready — though perhaps not waiting — when he was tapped as company president.

next page of this article:
A Flare For Jan/san Sales