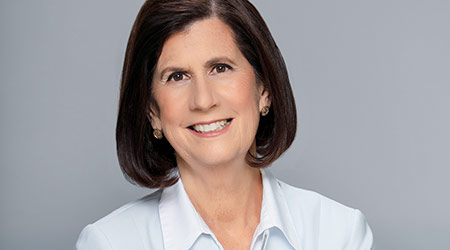 From a golf course located on an apple orchard in Middlefield, Connecticut, Meredith Reuben takes a moment to talk about her company, EBP Supply Solutions. She's not a golfer, but it's an annual outing for EBP suppliers and their customers. Meredith works the beverage cart as golfers make their way through the course. She likes participating because the event gives her a chance to connect with people outside of the office. And because it supports the Melanoma Foundation, an important cause recognizing a former vice president.

Having served as CEO for more than 20 years, Meredith is the third generation of the Baum family to lead EBP Supply Solutions, which is now the largest family-owned jan/san distributor on the East Coast. As evidenced by her participation in the golf outing, she stays very involved in the business, leading the company while remaining true to the values demonstrated by her grandparents and parents in its earlier years.

"Much like a conductor follows the music, I am guided by our mission and strategic plan, which we update every year," she says. "I keep the beat by serving as a resource to my reports to make sure they're also following that plan. I try to be as visible as possible, regularly meeting with customers, visiting our branches and walking through our building."

With three locations that allow them to service all of New England and the Middle Atlantic states, EBP Supply looks much different than it did 100 years ago when her grandfather, Samuel (Sam) Baum, started the company with his two brothers.

Despite the differences in the company's size and scope, Meredith demonstrates the Baum family's signature characteristics — the vision, hustle, grit and determination — that have appeared in each generation of leadership since its founding. These characteristics have helped EBP Supply Solutions continue to thrive, flourishing in different ways with each generation.

The Baum family had recently immigrated to the United States when the three brothers began peddling bags and brooms from a horse-drawn carriage around the streets of New York. Seeing the opportunity, they opened Bridgeport Paper in 1918.

It was at work that Sam Baum met his wife Sadye, a bookkeeper at Bridgeport Paper. A visionary with an entrepreneurial spirit, the two married and Sadye became a working mother in the days when such a thing was unheard of. It was with her encouragement that Sam purchased the company from his brothers in 1937, changing the name to Eastern Bag and Paper.

"My grandfather was a great salesperson," says Meredith. "He often worked from 4 a.m. until late at night, calling on customers and getting sales."

In those days, there were as many as four paper distributors in every major city. With an immature infrastructure, commoditization wasn't as prevalent so it was up to the salespeople to highlight the product benefits. And Sam knew how to sell.

When a devastating fire struck the business in 1941, Sam and Sadye were undeterred. They moved the company across the street and continued to build the business. Their two sons, Gerald (Gerry) and James worked in the warehouse during high school before leaving for college.

Upon his graduation, Meredith's father, Gerry, would take the business into the next generation, with the support of his wife, Louise. Known as "the Vince Lombardi of the paper industry," Gerry wanted to deliver more for his customers and his family.

To achieve his ambitious growth goals, he surrounded himself with great people who provided even greater service. He also helped found Network Services Company, a collaborative partnership that enables distributors to service regional and national customers, serving as its first president.

"My father had a larger than life personality," says Meredith. "He was a visionary, recognizing as early as the '50s and '60s that the mom and pop model for distribution wouldn't survive for long."

In 1972, Gerry hired Jim Sugarman, a key appointment that would help fuel the company's long-term success. Around the same time, Louise also joined the company as the human resource manager. She established hiring protocols to help ensure that future Eastern Bag employees would share their customer-focused vision.

"Not only was my father committed to hiring the best management and sales talent we could afford, he was also committed to learning from his staff and investing in technology," says Meredith. "We were one of the first distributors to have an IBM computer and an integrated ERP system."

next page of this article:
Meredith Reuben Empowers Women