Why Public Toilets Are Important 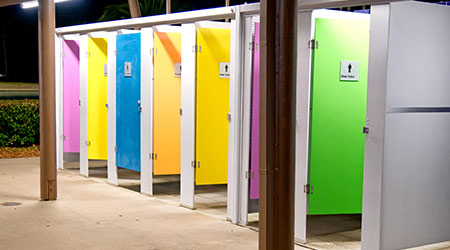 In the minds of many, the best public toilet is the one they don’t have to use. It’s not uncommon for someone to reject their bodies warning signs and forgo restroom use, waiting in pain until they’re able to scamper into their bathroom at home.

This perception of the public restroom, somewhere that must be avoided like the plague, is unfortunate. At their best, public restrooms should be viewed not just a place to relieve one’s self in a pinch, but also as a space that carries out important public services, says Rights Info.

Public restrooms, the website argues, offers pregnant women and disabled people a place where they can relieve themselves when home is just too far away. Those who suffer from anxiety attacks and other mental health issues can use the restroom as a sort of refuge — a place where they can go to collect their thoughts and relax.

There are a few other assets public restrooms provide that the website does not mention. While it does say that public restrooms are a place where the homeless can take care of personal hygiene, it should be noted that these spaces are also the only place where many homeless can simply use the restroom. Cities like Los Angeles and Washington, D.C., for example, have recently tried to implement more mobile restrooms for their homeless to use. Los Angeles, in particular, is struggling with its lack of public restrooms because its homeless are too often subjected to defecating and urinating on the street.

A spotted public restroom can be a blessing for parents, who know all too well the importance of getting their child to a toilet as soon as her or she needs relief. It’s hard enough as it is for parents to handle diaper duty away from home, but it would be much more difficult if the amount of public restrooms were dramatically reduced.

Published yesterday, Rights Info’s editorial appears to be, in part, a response to one Welsh city borough’s decision to install toilets intended to prevent people from having sex in public restrooms, as reported by various outlets.

The installation was later called back.

Rights Info’s piece goes on to discuss how the closure of public restrooms has become an issue in the United Kingdom and how these closures are related to a rise is hostile architecture and are threat to social rights.