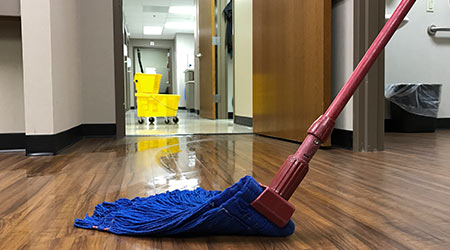 As president of Marshall University in Huntington, West Virgina, Jerome Gilbert’s job is probably pretty tough. The job of a janitor is difficult, too, as Gilbert found out when he recently shadowed a university custodian for a day.

Gilbert recently watched and assisted university janitor John Jones as he collected garbage, vacuumed floor and conducted other labor, reports The Herald-Dispatch. Like other members of the university’s staff, Gilbert helped clean campus as part of the university’s “Be A Housekeeper Day,” which was held in celebration of International Housekeepers Week.

Held each year during the second week of September, International Housekeeping Week honors cleaning professionals and the work they do on a daily basis.

Gilbert told the Herald-Dispatch that he hoped to show housekeepers that their work doesn’t go unnoticed through his participation in the job shadow.