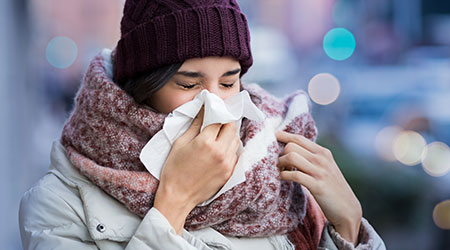 Fall is officially here – and with the shorter days and cooler weather, comes a reminder of the approaching flu season.

All across the United States have been reports of the flu breaking out earlier than usual. Perhaps that’s no surprise considering what Australia went through during flu season.

“Based on what we’ve seen out of Australia, the U.S. can expect a moderate to severe flu season,” says William Schaffner, M.D., professor of preventive medicine and infectious diseases at Vanderbilt University, in a press release from GOJO. “Australia saw an early start to their flu season, with a predominant circulation of the influenza A (H3N2) virus. The good news is that strain was included in this year’s flu vaccine for the U.S. and since every flu season is different, the U.S. flu season won’t necessarily follow the same pattern as Australia.”

Be prepared for the upcoming cold and flu season with the following five tips from GOJO:

During the 2017-2018 U.S. flu season, the flu vaccine prevented an estimated 7.1 million illnesses, 3.7 million hospitalizations, and 8,000 deaths associated with the flu, according to the U.S. Center For Disease Control.

Health experts know that more than 80 percent of illnesses can be transmitted by hands.

3. Know when to clean hands

Knowing when hands must be cleaned  is a key component in practicing good hand hygiene. Critical times include before eating or preparing food; after touching something that could be contaminated, such as a garbage can or restaurant menu; after caring for someone who is sick; after changing diapers; after sneezing or coughing; and after using the bathroom.

Since so many illnesses are transmitted by touch, it’s important to clean objects and surfaces that people may frequently encounter, such as cell phones, door handles, handrails, elevator buttons, refrigerator handles, shopping cart handles, countertops, etc. After touching these surfaces, people often touch their face, other objects or other people, spreading these germs further. Disinfecting surfaces and objects helps eliminate the number of germs that are passed around and picked up by others, breaking the cycle of infection.

Be a hero to others this cold and flu season by not coming into work while sick, like so many Americans do. The CDC recommends that people stay home for at least 24 hours after their fever is gone except to get medical care or for other necessities.