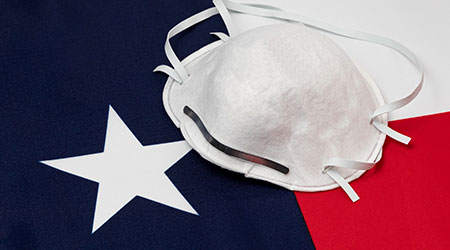 The internal battle within the state of Texas between individual school districts and the state government is nothing new when it comes to COVID-19 protocols (or lack thereof). Going back to August, we covered an instance of one district in the state taking matters into their own hands at the onset of the school year to implement a mask mandate — in defiance of a face covering ban implemented by Gov. Greg Abbot.

As the New York Times recently reported, federal judge Lee Yeakel recently determined that Abbot's mask mandate ban is in violation of student rights for children with disabilities — a ruling made in the U.S. District Court for the Western District of Texas. The decision gives individual school districts in Texas the ability to decide whether or not to implement mask mandates for their schools.

The decision stems from a lawsuit initially filed back in August by several families whose kids have disabilities, and worked in-tandem with Disability Rights Texas — an organization dedicated to assisting the aforementioned parties. The filed suit argues that mask mandates should be at the discretion of school district management and should be made based on transmission, particular student safety and what overall is the safest decision as it pertains to the area in question. Upon his decision, Yeakel adds that districts without the ability to make a mask mandate discriminate against students with disabilities from participating in certain activities or services. As a result, it was a violation of the 1990 Americans With Disabilities Act.

The defendants in the case — Mike Morath of the Texas Education Agency and Texas Attorney General Ken Paxton, disagreed with Yeakel's decision, a ruling that prevents Paxton from enforcing Abbot's ban face coverings. Paxton also said that they will look into all legal measures to overturn the judge's ruling.

Over the past several months, a number of school districts have been at odds with the mandate ban requiring some schools to either modify their mask mandates or rescind them altogether — a decision that came in response to Paxton sending letters to those districts threatening legal action if the statewide ban wasn't followed. If the current ruling from Yeakel stands, it will certainly change the infection control procedures and protocols for many school districts and potential serve as a framework for similar cases across the United States. In the state of Texas alone, over five million students could potentially be affected by the decision.

Be sure to check back in to CleanLink for similar updates on COVID-19 protocols.