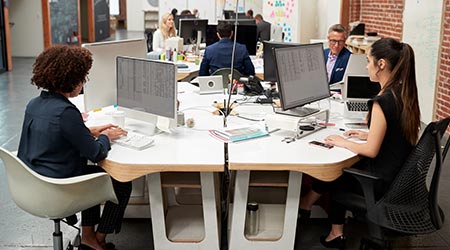 A survey shows workers are unhappy with an increasingly common office practice that impacts how offices are used (and therefore cleaned.)

The system in which employees share workstations with other workers, known as “hot desking,” is getting the cold shoulder from the workforce, according to a report by Workplace Insight. About half of the 1,000 office workers surveyed by real estate firm Savills say sharing a workspace makes them less productive, compared to the 12 percent that say it helps them to get work done.

The survey also concluded there is little to suggest younger workers prefer a business that has embraced a flexible working model and that offices in the United States and United Kingdom are more likely to have an open plan compared to those in other European nations.

The study by Savills follows numerous reports of the changing landscape of office spaces.

Meanwhile, a 2018 Advanced Workplace Associates (AWA) study of 130 organizations discovered several key trends taking place in offices. For example, only 7 percent of respondents think an alternative workplace program would negatively impact their productivity. The survey also found that internal mobility within the office setting more than doubled between 2008 and 2018, meaning that employees are moving around offices more freely.

Research has shown that the common personal space per worker is decreasing, making it easier for cross-contamination to occur. Shared office spaces are also on the rise, which is an issue because the people working in these settings will, on average, have two more episodes of the common cold per year than those working in private offices. As offices increasingly shrink and workers continue to socialize, the importance of a clean office becomes more critical.

For more information on how to clean these changing work spaces, click here.