Study Says To Avoid All Water On Airplanes 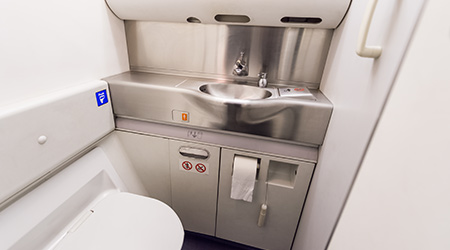 Whether its being used to wash hands or drink, the water found on most U.S. airlines isn’t worth using, according to the the 2019 Airline Water Study, which was shared via press release.

Developed in partnership between DietDetective.com and the Hunter College NYC Food Policy Center, the study tested the quality of water on 11 major airlines and 12 regional airlines.

Water in the study was rated a scale of zero to five, with scores of three and higher constituting water that is safe enough to drink. The zero to five scoring was given on 10 criteria, such as the presence of coliform bacteria or E.coli in the water.

Alaska Airlines and Allegiant tied for first place in the study, while Spirit and JetBlue came in last.

In response to these findings, Hunter College NYC and DietDective.com suggests that people:

Water isn’t the only thing to avoid on airplanes and at airports. Here is a list of the tops germ hotspots during air travel.