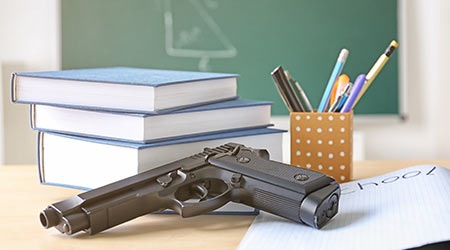 After a gunman killed 17 students and employees at Marjory Stoneman Douglas High School in Parkland, Florida, on Feb. 14, 2018, state lawmakers passed a law allowing some school-district employees to carry guns on campus.

Lawmakers are now considering expanding the program so that teachers can volunteer as "Guardians." They had been previously excluded from the law, according to Tampa Bay Times reports.

The guardians volunteer to help in active-shooter situations. While classroom teachers are not yet eligible, coaches, principals, janitors, cafeteria workers and other school employees are. Guardians are trained to stop an active assailant on campus but they cannot make arrests or otherwise act like police officers.

Last year, school districts and sheriff’s offices across the state could choose whether to participate in the initiative. Those that declined had to put a sworn law enforcement officer in every school, but many districts opted in to the program.

In April 2018, for instance, CleanLink reported that the Brevard (Florida) School District polled 700 eligible school workers regarding allowing school workers to carry handguns. About 260 of them — close to 40 percent — said they would be interested in serving.

Eligible employees were given more than 130 hours of training, including 80 hours of firearms instruction.

Proposals that would arm janitors against school threats are not new. In 2013, lawmakers in South Carolina, Oklahoma, Missouri and South Dakota were looking into legislation allowing school employees with permits to conceal carry. Similar moves were also considered in California and Texas.