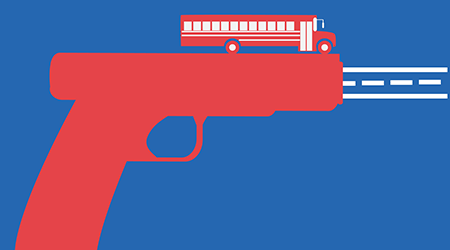 In March, Florida Gov. Rick Scott signed a “school safety” law that would allow trained school workers to carry handguns. The Sheriff-Trained Onsite Marshal Program (STOMP) would be limited to full-time personnel like vice principals, cafeteria workers and custodians — but not classroom teachers.

The Brevard School District recently polled 700 eligible school workers, and about 260 of them — close to 40 percent — said they would be interested in serving, according to Newsweek reporting.

If a pending proposal to arm district employees clears the school board — a vote is scheduled for May 8 — eligible employees would undergo more than 130 hours of training over about five weeks during the summer, including 80 hours of firearms instruction.

A school board representative said a number of liability and insurance issues would need to be “ironed out” before the proposal could become official policy.

Teachers, concerned parents, gun control advocates and others voiced their concerns at a recent public forum. Many say STOMP is not “a true security program” since “only real law enforcement officers are trained to do full-time security.” And others worry that custodians and principals will be distracted with their primary job duties and simply can not have eyes and ears all over the building at the same time.

Proposals that would arm janitors against school threats is not new. Back in 2013, lawmakers in South Carolina, Oklahoma, Missouri and South Dakota were already looking into legislation allowing school employees with permits to conceal carry. Plans were also in place in the California state legislature and with the Texas lieutenant governor that authorizes school districts to use federal and state funds to train and qualify school staff to carry concealed firearms.

But regardless of legislation, guns or proper training, school janitors across the country are jumping into action when threats present themselves. Here are three such stories from just the last few months.