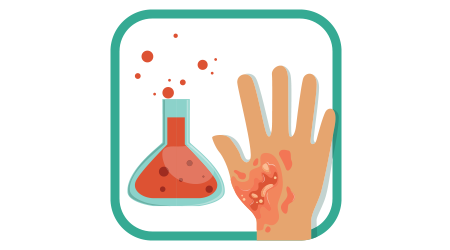 A few people at an IKEA in the Netherlands suffered chemical burns after a bottle of hand sanitizer at the store's entrance was accidentally refilled with drain cleaner.

Two customers and one store employee reported a burning sensation and difficulty breathing soon after pumping what they thought was hand sanitizer onto their hands, reports NL Times. IKEA tells the NL Times that all three victims were treated at the store by paramedics that had been summoned. In total, five customers and three employees had accidental contact with the drain cleaner, the company says.

Police told another Dutch news outlet, NOS, that the incident was a mistake. Police say that the person responsible for cleaning the store doesn't have a total understanding of the Dutch language. As a result, she had trouble telling a difference between the bottle of hand sanitizer and bottle of drain cleaner, which police say look a like.

IKEA says the incident occurred because a member of the store's cleaning staff accidentally mixed an unknown cleaning fluid with a disinfectant, causing a chemical reaction.

Of course, incidents like these often take place in the United States, too. Last November, two separate cleaning chemical accidents occurred at Boston-area restaurants within days of each other. One of the incidents lead to the death of an employee.