Self-Sanitizing Changing Stations Are On The Rise 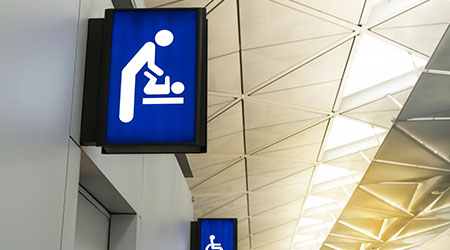 Parents and caregivers are no strangers to the perils of diaper changing away from home. Whether it’s in a unkept public restroom or even in one’s one car, the decision of where to change it often comes down to the lesser of multiple evils. Facility cleaning managers, building service contractors (BSCs) and distributors looking to improve this experience for building occupants could have a new option to consider, however.

Addie Gundry, founder and CEO of Pluie — which develops self-sanitizing changing stations — was inspired to start her company back in 2018 when a less-than-flattering public restroom served as the necessary place for her to change her child’s diaper. She noted both the security strap as unclean and surface being just a hard piece of uncomfortable plastic. She had serious doubts of whether the station was ever sanitized or even tended to.

Inspired to make a better experience both for her own child and others, she designed the Pluie changing table, equipped with a waterproof, foam cushion, metal handles that allow for easy bag storage, and a retractable safety strap in lieu of a buckle for added security and hygiene, reports CBS 4 Indianapolis

The key differentiator to Pluie’s design, whoever, is implementation of UVC light. Often associated with surgery rooms and other sectors prone to pathogens, the same concept is applied to the changing station, which Hizer says disinfects the table in one minute. E-coli is one of many potential risks of uncleaned baby stations, especially in facilities where the cleaning frequencies aren’t up to par. While the UVC light is effective at pathogen elimination, it can’t remove soil, so the use of a disinfectant wipe in addition to the technology is recommended.

As it stands nationally, 75 Pluie changing stations are in operation, including two at the Conner Prairie history museum in Indiana. Research conducted by CBS 4 indicates that no signification innovations have been made to baby changing tables since, and no current laws exist requiring the routine sanitization of the tables.

With momentum going in the right direction, Pluie has plans for expanded production in 2022 and hopes to continuing redefining the changing station experience.

On a related topic, check out this story of two entrepreneurs who developed a self-sanitizing toilet seat set to be introduced in multiple NBA arenas.