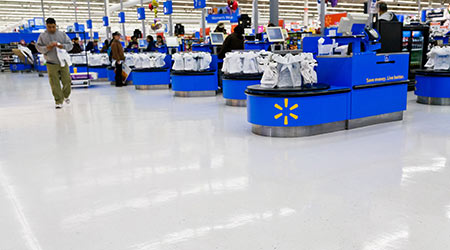 After testing the concept at during the overnight shifts at five stores near the company headquarters in Bentonville, Arkansas, Walmart is rolling out 360 autonomous floor-scrubbing robots in some of its stores in the U.S. by the end of the January, according to an article on the Bloomberg website.

The autonomous machines can clean floors on their own even when customers are around, according to the manufacturer, Brain Corp.

The robots, which look like a cross between a miniature Zamboni and a motorized wheel chair, are already on the job at airports in Seattle, San Diego, Boston and Miami. Brain Corp. is now pitching the robots for security patrol and deliveries inside big-box stores.

According to early reports, the shift to explore robotic equipment caused concerns among employees, especially when testing first began. But a Walmart spokesperson said they’d only be used if tests proved successful.

The machines come equipped with extensive cameras, sensors, algorithms and Lidar for navigational mapping. A staff member must first drive the device to train it on a path; it can then operate largely independently, including when a store is open to customers. If a person or object gets in its way, it momentarily pauses and adjusts course.

Walmart spokespeople say the robots will not result in the loss of jobs. According to the retailer, the machines are meant not as a replacement for humans but as a way to address challenges in the labor market. Many companies struggle with high turnover and difficulties in hiring janitorial staff to work third-shift positions.