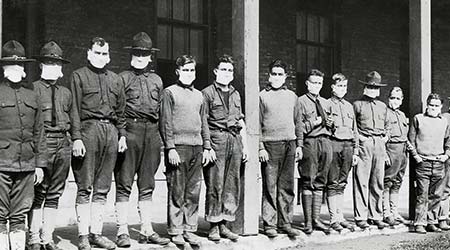 With flu breakouts likely on the horizon throughout the United States, one of America’s biggest cities is remembering an outbreak it experienced 101 years ago.

Hundreds of thousands gathered in Philadelphia Sept. 28, 1918 to watch the Liberty Loan Parade, an event put on to gather public support for government bonds intended to aid the Allied Forces’ efforts in World War I. Among those guests was influenza, which would go on to kill nearly 13,000 in the city in the weeks following the parade, reports The Washington Post.

Historians now believe the massive parade helped to spread influenza throughout the City of Brotherly Love.

Ironically, a parade will take place in Philadelphia this Saturday as a kickoff to “Spit Spreads Death,” an exhibition and project put on by the Mütter Museum of the College of Physicians of Philadelphia. People will march in honor of those who died in Philadelphia due to the pandemic, and the names of the 751 people who died on its deadliest day will be announced.

In addition to honoring those who died in the 1918 flu outbreak, the purpose of the event is to draw attention to all of those who contract the flu in the United States today.

The somber parade might seem extra jarring to members of the crowd after  the World Bank and the World Health Organization announced last week that the world is ill-prepared for a global pandemic should one occur.