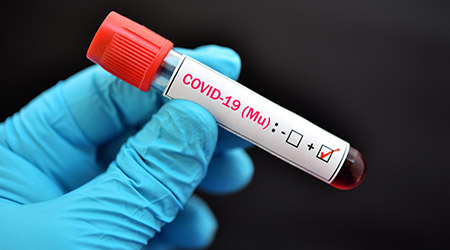 Facility cleaning managers and BSCs alike pushing for staff vaccination appear to have even more reason to do so. While the COVID-19 Delta variant remains the primary strain of the virus in the United States, a new strain known as the 'mu' variant has been detected every state besides Nebraska with fear that it may have higher contagion rates than Delta, Fox 11 Los Angles reports.

First discovered back in January in Colombia, the mu variant is yet to have ant severe impact on U.S. case rates, accounting for fewer than 1 percent of all recorded positives. The hardest hit state so far with the new strains California, with at least 384 recorded cases as of last week.

The primary concern according to Las Angeles County health officials center on findings that the mu variant has both a higher transmission rate than the notorious Delta variant, while also potentially being more resistant to current COVID-19 vaccine options.

Both the Centers for Disease Control and Prevention (CDC) and World Health Organization are continuing to gather more information on the specifics and severity of mu. The WHO currently has the strain classified as a "variant of interest" (VOI), meaning, indicating resistance to a vaccine is possible and being monitored.

In the meantime, LA public health officials continue to encourage vaccinations to both reduce case rates altogether and diminish the prevalence of the virus and its ability to further mutate into more severe strains. For more information on the transmission of COVID-19 and variants compared to other illnesses, click here.