How Contagious Is The Delta Variant? 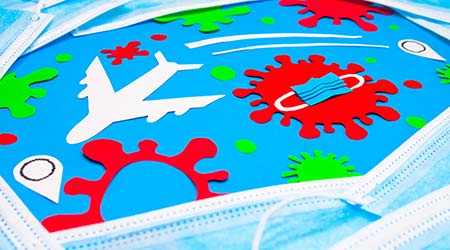 An internal report for the Centers for Disease Control and Prevention (CDC) stated that the recent Delta variant for COVID-19 was as contagious as Chickenpox. But according to studies  from multiple sources — including John Hopkins University, the Australian Government Department of Health and the University of Leuven in Belgium — findings indicate that while Delta is more contagious than the original COVID-19 strain, it’s not quite as transmissible as Chickenpox.

The findings, as covered by NPR, measure the contagion of notable illnesses on a metric known as Ro, also referred to as "R nought," which estimates how many people will be infected from one source. The original strain of COVID-19 had an Ro of three, meaning that the average person can spread the disease to three people when they became infected. For reference, regular influenza has an Ro of two and Mumps has a staggering Ro of 12.

The Delta strain of COVID-19 has an Ro of seven — a significant jump when considering the multiplying factor it potentially holds (3x3x3 vs. 7x7x7, for example). It falls short, however, of Chickenpox that holds an Ro of 10.

Current data on vaccination success against Delta indicates a slightly less than 90 percent effectiveness, which means 10 percent of vaccinated people could still become afflicted and symptomatic. For more information on the Delta variant and how it differs from the Alpha or original strain, click here.

Meanwhile, this data is important for custodial professionals as they tackle cleaning and disinfecting of surfaces in facilities where occupant numbers are increasing. Maintaining proper frequencies will keep cross-contamination numbers down, but communication will be key in cases where occupants become ill. Cleaners must be ready to jump in and tackle those areas in an effort to stop any spread.