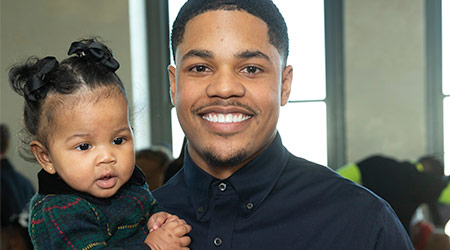 Pampers’ commitment to install 5,000 changing tables across North America by 2021 has secured the help of seven hands-on NFL dads. In honor of this Saturday’s National Make a Difference Day, Pampers is leading the installation of changing tables in New York, San Francisco, Chicago, Philadelphia, Denver, Detroit and Charlotte, North Carolina so parents can change their child’s diaper when they’re out and about in their community with their babies.

The seven NFL dads installing the changing tables in locations nominated by local dads and moms include:

“On the field, I’m focused on the game, but off the field, I’m all about being as present and active as possible with my baby, especially during diaper duty,” says Shepard. “When I learned that nine out of 10 dads have gone into a public restroom that has not had a baby changing table, I couldn’t help but get involved with Pampers’ commitment to provide more access in public restrooms.”

As part of the celebration, Pampers is again partnering with Donte Palmer, who placed changing table inequality front and center in 2018, when an image he posted on social media of him squatting while changing his child’s diaper went viral.

The changing table dilemma impacts both men and women as many public facilities lack restrooms that feature a space for changing a child’s diaper.