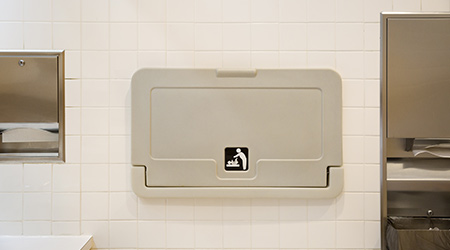 As far as public restroom fixtures are concerned, one of the biggest differences between men and women’s facilities that will be cited is the presence of urinals, or lack their of. That difference isn’t hard to understand, as the women’s restroom has no practical use for a urinal. However, it’s hard to rationalize why baby changing tables are so often lacking from men’s public restrooms — a longtime issue that’s frustrated many fathers. So much so that one man is letting this issue be known to anyone who will listen.

Michael Reinmiller of Lincoln, Nebraska, will voice his frustration anytime he encounters a business that doesn’t have a space to change his son’s diaper, reports 1011 Now.

It’s gotten to the point where the first thing Reinmiller will do when he’s out with his son is ask if the facility they’re visiting has a place to change his diaper. He says there have been instances in which he’s had to take his shirt off in the restroom and lay it on the restroom floor just so his son can have a clean place to lay as he gets his diaper changed.

Reinmiller’s concerns have made some changes. Lincoln Public School has added changing stations to the men’s and women’s restrooms on the second floor of its high school and its athletic area because families use these facilities.

Yes, women are a little more likely to encounter a baby changing table than men, but they’re still prone to not finding one at all when they visit the restroom. Good Housekeeping recently ran an article in which a mother of two describes how she’s hyper-aware of what businesses near her home she can and cannot go to simply because they don’t offer a clean and comfortable spot to change a baby’s diaper.